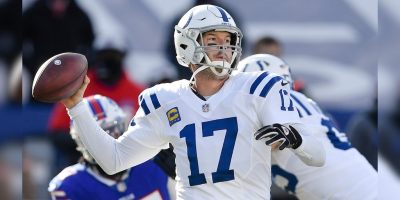 The discussion of whether Philip Rivers should be back with the Colts will be moot if Rivers decides to hang it up.

The reason to move on from Philip Rivers as Colts quarterback has nothing to do with the bad plays he avoids, but the great plays he cannot make.  The lack of mistakes is not enough to win a championship.

The well-earned rap on Rivers when he left the Chargers to join the Colts was the frequency with which he threw the ball to opponents.  He exceeded expectations with the Colts for not throwing it to the other guys by lowering the interceptions total from 20 in 2019 to 11 in 2020, and the Colts won more games (11) with Rivers than anyone had a right to believe they could.

An 11-5 record put the Colts into the playoffs, and that was a solid regular season result, but assessing quarterback play in the AFC shows the Colts have a significant disadvantage in the playoffs even if Rivers plays clean.  That chasm was put into clear focus Saturday in Buffalo as Josh Allen‘s versatility was a significant reason the Bills beat the Colts.

The four starting quarterbacks on AFC teams that will play in the divisional round this weekend are Allen, Patrick Mahomes, Lamar Jackson, and Baker Mayfield.  Combined, they ran for 134 first downs during the 2020 season (Jackson – 56, Allen – 38, Mahomes – 22, and Mayfield – 18).  Rivers ran for none.  In playoff games this weekend, Jackson ran 16 times for 136 yards and Allen ran 11 times for 54 yards.  Rivers did not run, which was good because he can’t.

In the film Finding Forrester, Sean Connery’s character gives a great piece of advice as a mentor to a high school student named William, “A key to a woman’s heart – is an unexpected gift at and unexpected time.”  Just as true is a similar adage, “The key to winning a playoff game is unexpected yards at a necessary time.”

Rivers is incapable of providing those yards, while Allen, Mahomes, Jackson, and Mayfield do it again and again.

Another thing Rivers is not capable of, if Saturday’s performance can be used as a guide, is moving the football into field goal range for a game tying kick with two-and-a-half minutes left on the clock and a single timeout in his pocket.  That isn’t all Rivers’ fault.  Frank Reich blew one of the timeouts with a useless replay challenge, and the other timeout seemed to result from the officials not resetting the play clock.

Still, the final play of the Colts last gasp 13-play, 39-yard drive was a Hail Mary Rivers launched from midfield that never reached the end zone.  Being able to throw a football 75 yards is not a prerequisite for NFL success, but Hail Marys that don’t cross the goal line are certainly doomed to fail.

The loss to the Bills doesn’t fall squarely on Rivers’ shoulders.  Blame is shared by Reich, Kemoko Turay for being drawn offsides as the Bills faced a crucial 4th and 3 late in the first half, and Rodrigo Blankenship knocking a 33-yard field goal into the right upright are easy and accurate targets.  Rivers didn’t really do anything wrong, but he isn’t capable of doing nearly as much right as Allen.

QBR is a nice approximator of a quarterback’s total value to an offense.  Unlike Passer Rating, it takes into account ability to run the ball.  The four QBs we discussed earlier have far superior QBRs to Rivers 62.7.  Mahomes – 82.9, Allen – 81.7, Jackson – 73.9, and Mayfield’s is 72.4.  All are in the NFL’s top 10.  Rivers is 18th, right between Kirk Cousins and Mitchell Trubisky.

In fact, seven of the eight remaining quarterbacks in the playoffs are in the top 10.  The only exception is the Rams’ Jared Goff, but he has the luxury of the NFL’s best defense mitigating the effect of his mediocrity on Rams.

Rivers is not to be blamed or held in lower regard because of his limitations.  He is who he is – a great guy who loves football and plays as well as he is capable.  That’s the damnable aspect of evaluating Rivers as a candidate for 2021 – his work in 2020 was to his potential.  Maybe he could shave a couple of interceptions from the 11 he threw this year, but overall he was as good as anyone had a right to expect.

The other very important piece of the puzzle for 2021 is – if not Rivers, then who?  Does Chris Ballard want to hand the keys to the offense to fourth round rookie Jacob Eason?  Probably not. What about signing yet another imperfect free agent?  The names Trubisky, Fitzpatrick, Dalton, and Newton give you goosebumps only if you cheer against the Colts.

At 39, Rivers has never been to a Super Bowl, and hasn’t made it to a conference championship since the day after rookie running back Jonathan Taylor‘s ninth birthday.  But at least the Colts know they can make the playoffs with Rivers slinging it awkwardly while rooted in the pocket.

Rivers is who he is – an old quarterback whose greatest assets are between his ears and within his chest.  The world might be a better place if that’s all it took for a quarterback to contend for a championship, but unique physical gifts are every bit as important.  It takes a strong arm to win, and unless you are Tom Brady, you better have some quick feet too.