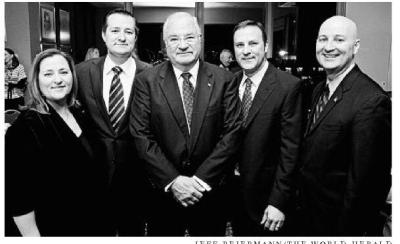 Christmas has come and gone, but as the Cubs continue to lance payroll at every turn, it’s time for a peek at Chicago’s least favorite family – the Ricketts.

(This teleplay was written in the voice of the Ricketts Family but is not meant to represent an actual conversation they may or may not have had at any dining room table during any holiday meal.  Names, characters, businesses, places, events, locales, and incidents are either the products of the author’s imagination or used in a fictitious manner. Any resemblance to actual persons, living or dead, or actual events is purely coincidental.)

Tom: Only room for six at the table.  The leafs are being sanded and re-finished, so sorry wives, it’s to the card table in the living room for you again this year!

Joe: (Laughs) Every Christmas you get the extension dealies for the table refinished!

Tom: They’re called leafs, Dad.  Pete, how was the flight from Lincoln?

Pete:  I want the real plane next time, Tom.  Let’s leave it at that.  By the way, when are you finally going to move to Lake Forest from this Wilmette outhouse?  That’s where the real money is.  W. Clement Stone would be caught dead in this joint.

Tom: Pete, why don’t you focus on running the state high school kids had the toughest time pointing to on a map.  And those kids were from Nebraska!

(All but Pete laugh.)

Joe: Let’s get down to brass tacks, Tommy!  When are you going to replace those hotdogs at Wrigley Field with my delicious High Plains Bison burgers, sausages, and snacks?

Todd: I win the pool.  Dad tried to sell more bison to the Cubs 90-seconds into dinner.

Laura: Did you know bison are the same animals we used to refer to as buffalo?  Isn’t that something?

Joe: And why are you paying those ballplayers millions of dollars anyway?  People come to the ballpark whether or not your team is any good.

Crane, can I get another dollop of cranberry sauce?

Joe: Bull roar, boy! Thanks, Crane.  Is that what they taught you at the University of Chicago?  Why you wasted your time and my money at that hyper-intellectual institution of impracticality is beyond me.  Fans want to re-live memories, convene with family, or drink beer with friends.  Whether the Cubs win or lose, 32,000 or more show up 81 times each year!  There’s your MBA!

Todd:  Enough baseball.  Dad, you you write another check.  2022 is going to be huge.  Need to re-take the house and senate.

We’ll stop talking about the Cubs when I say we will and not a minute before, Todd!

Get rid of the big contracts for a couple of years, just as a test.  See what happens at the gate.  People watch garbage and championship level baseball with equal enthusiasm at Wrigley.  Your mistake was in building a winner.  What did I tell you would happen?

Laura: Did you know Great Expectations was first published as a serial by Charles Dickens?  Isn’t that something?

Laura: Why do you always call me Pip?

Joe:  There are two keys to making a lot of money – controlling expenses and exploiting customers.  Also, owning the real estate is a good idea.  Okay, there are three keys to making a lot of money – control expenses, exploit rabble, and own the property where your endeavor is housed.  Jeez, poor Crane here tried to turn Wrigley Field during road trips into a drive-in movie joint, and people still came.

Tom: So we should do more off-day events?

Joe: God no.  That was insane.  You gave Crane too much slack, and he went off the rails. (Crane sulks as he refills Laura’s stock of mashed potatoes.)   Sorry, Crane, but a man has to learn his limitations and your lot in life is making sure this family has all the butter, potatoes, and cranberries it can stuff into its gullet on Christmas Day! (everyone but Crane laughs.) Tom, cutting expenses without the potential for meaningful consequences is the soundest business principle there is.

Tom: So you’re saying that if I gut the roster, people will still come to Wrigley Field?

Joe: Am I going too fast for you?  It doesn’t matter if you have Lester John or Jon Lester on the mound on May 14th.  If you draw more than 13,000 with some rag armed sot, you are cash ahead over your ROI on Lester at 27.5-million.  What kind of idiocy was Epstein peddling you?

Laura: Did you know Theo Epsein’s grandfather and great uncle penned the script for the film classic Casablanca?  Isn’t that something? (everyone groans)

Tom: Let me get this straight – if we cut the big contracts, field a team of castoffs and young talent, and keep ticket prices static, we’ll make as much money as if we win another World Series?

Todd: How is any of this going to win back the Senate and House?

Joe: What I’m saying is if you cut the payroll to where the A’s and Rays have it, you will make much more money than if you win a World Series every year, and that’s the name of the game boys!

Pete: But don’t we have a responsibility to Cubs fans who love the team?