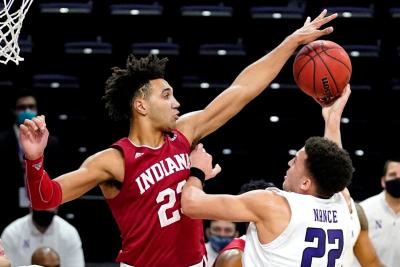 This defensive excellence should be a 40 minute habit. Instead, the Hoosiers only roll up their sleeves when their backs are against a wall.

Indiana has been a vexing basketball program for the two decades since Bob Knight was fired, and this year’s team might be the most baffling of that bunch.

There have been exceptions like the 2002 and 2013 teams that won the Big 10 and had the glint of a potential national champion, but for the most part fans have had a tough time developing an accurate expectation of style and execution of play.  Again, this year’s team confuses fans – often from possession to possession.

The Hoosiers missed more than half of their free throws in last night’s win at Northwestern before finding the bottom of the net on its final 14.  Defensively, Indiana communicated poorly and allowed the Wildcats open look after open look before finally getting in a stance, containing drivers, and contesting every shot.  Same players, but wildly different levels of effort depending upon the level of urgency in the moment.

Throughout Archie Miller‘s uneven four years as coach, Indiana has shown itself capable of beating anyone, but also losing to anyone – many times in the same week.  Miller’s Indiana teams are 3-9 after beating a ranked opponent – including last night’s win which came after a win against #8 Iowa.

The offense Indiana runs most seems quite easy to defend.  Make a pass, set a ball screen, enter the post, repeat.  When Trayce Jackson-Davis begins to make his move, defenses bring a double team – always.  Jackson-Davis pops it back in the direction from which the ball came, and the process is repeated until the Hoosiers are forced by the shot clock to shoot.  It’s predictable and nauseating.

Where Indiana finds success is in creating offense from its defense.  When Indiana chooses to lock down, they force live ball turnovers and missed shots.  Like most basketball teams, Indiana tends to convert open looks in transition.  “Defense leads to offense,” every basketball coach on the planet tells his or her team.  Indiana is the poster child for that axiom.

The expectation for the Iowa game was that the Hawkeyes, with the first loss to IU still fresh in their memories, would come to Bloomington Sunday intent on embarrassing the Hoosiers as punishment for their temerity in winning in Iowa City.  Indiana found a way to stick around long enough to win on an Armaan Franklin jumper from the elbow with 1.5 seconds left.

Last night, fans believed IU was capable of beating up on Northwestern – a team that had lost its previous nine games.  Of course, they got off to an almost impossible to watch start, allowing the Wildcats to take a 21-7 lead.  Somehow, the Hoosiers rallied to shave that deficit to three at the half.  Indiana lead for all of 14-seconds through regulation and the first overtime period before winning in the second OT.

Now, IU looks ahead to #4 Ohio State in Columbus on Saturday.  Fans believe there is no way the Hoosiers can stay with the Buckeyes, which means that is exactly what they will do.  It’s maddening, but it’s better than believing they will lose and being right!

All this leads to the question of whether the bizarre cycle of up and down effort from Indiana players is due to a general lack of mental toughness for modern student-athletes – or Miller’s inability to lead a team to play to its ability on a consistent basis.  The answer might lie in West Lafayette where Purdue seems willing to compete regularly at a high level.  How can Indiana’s toughness be part of a generational malaise when the Boilermakers are as relentless as they are.

Because we aren’t at practice, we don’t really know what Miller does as a leader to try to compel compliance.  What we know is what we see – that Indiana players seem to be happy and comfortable all the time.  Up 10, they smile.  Down 10, they smile too.  On the bench, they appear pleased to cheer for teammates, rather than furious they aren’t on the floor.  Sometimes they lock in, and sometimes they don’t.  But always, they congratulate themselves and each other.

Because it’s hard to assess the cause of the problem, it’s impossible to suggest a corrective path.  I would prefer a coach respond to a player being lost by forfeiting that player’s right to compete, but it seems like the Hoosiers are as comfortable on the bench as on the floor.

Maybe this is a locker room issue that needs to be addressed by a player who demands more of his teammates – a tough guy who leads his peers into a little discomfort.  But I think Indiana has been looking for that guy for a long, long time.

Until the problems that seat Indiana at the Big 10’s kiddie table are solved, maybe fans need to take a deep breath and understand that just as IU was known for being tough guys for the first 24 years under Knight, they are now defined by a lack of toughness that leads to wildly uneven results.

On to another roller coaster in Columbus!

One thought on “Indiana Basketball – Roller coaster of effort continues, but with a two-game winning streak!”