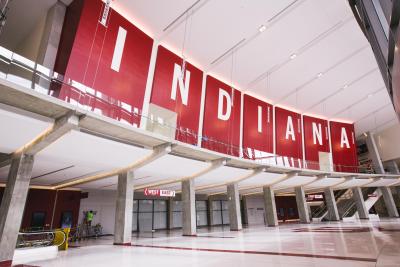 Assembly Hall used to be Indiana’s Great Church of Basketball. Now, it’s a just a place where kids play.

Over and over since Indiana’s bizarre and thoroughly disappointing loss to Michigan State, I have tried to write a reasonable and sober defense of Archie Miller and his Hoosiers.

I mention the team’s youth, the need to avoid a death spiral for Miller’s job as he will lose the ability to recruit prior to finally being canned, the $10.5 million buyout – a borderline indefensible expense given COVID related athletic department financial losses, and the remaining four regular season games.  About halfway through, I lose interest in what I’m writing and start fresh.

None of the crap I wrote about mitigating factors matters.  It’s all nonsense.  Writing about Indiana Basketball should not be about excuses for mediocrity, and it sure as hell should never be about buyouts.  It should be about winning games, clever offensive and defensive schemes, and recruiting to a culture of toughness and excellence.  Championships should be the goal, and excellence the expectation.  Failure to move toward superiority should be answered by writing the check to start fresh.

The sad truth of Indiana Basketball is that they are mired in relentless mediocrity from which there appears to be no relief.  Since 2016, IU has not secured a bid to the NCAA Tournament.  If not for COVID, they were a bubble team last year and may have been invited.  We just don’t know.  Indiana has yet to post a winning Big 10 record under Miller, and barring some odd and unforeseeable pivot toward greatness, this will be the fifth straight season they have failed in that regard.

Why has Indiana been so average for Miller’s four seasons?

Indiana under Miller has been defined by a lack of cohesiveness, toughness, and development.  All those qualities are shaped by the head coach, and Miller has utterly failed in instilling any of them.  Miller himself talks about the lack of toughness in postgame media appearances.  After four years, I’m tired of the talk.  Enforce a culture of toughness, or clear the deck for someone who will.

Can you imagine any reason this upcoming offseason to buy into the inevitable talk about finally reaching a turning point?  I hope you can.  It will keep you engaged during another long spring and summer.  I applaud your optimism, even if it is based in delusion.  As for me, I’ll side with Shakespeare, who wrote, “What’s past is prologue.”  That means, it is what it was.  Indiana long got by on the momentum of a program built on a foundation of toughness, shooting, and emotional investment.

Right now, Indiana is not tough, can’t shoot, and appears to be ambivalent to its collective responsibility to compete.  There are outliers like Armaan Franklin and Race Thompson, who fight from possession to possession, but Indiana’s overall mode screams satisfaction.

If all that isn’t unacceptable to the people in charge – from Miller to athletic director Scott Dolson all the way up to outgoing president Michael McRobbie – then shutter the damn program and call it a day.

Indiana Basketball is the most important connection graduates have with the university.  Watching every game used to be an inviolable appointment.  We can’t watch students take A211 or H106 exams, so we watch basketball.  The joy and pride we felt for years as the Hoosiers competed has eroded, replaced by frustration which has now evolved toward a dangerous level of indifference.

The sad truth is that auditing freshman as they take an accounting or history test might be more enjoyable than watching a basketball game.

COVID has served a purpose as Assembly Hall’s empty seats were mandated by a need for social distancing instead of fan ambivalence to the Hoosiers as a team and institution.  If not for COVID, those seats would communicate the grim truth that a large swath of IU fans have responded to the team’s muddled and inconsistent effort by choosing another way to enjoy themselves.

The problem with moving on from Miller is that an upgrade needs to be found, and that is a responsibility that has resulted in failure after failure since Knight was fired in 2000.  Trusting Miller to rebuild from his own mess is foolish, but expecting the power structure that has provided Indiana fans with leaders like Mike Davis, Kelvin Sampson, Tom Crean, and Miller to hire the next coach is idiocy.

I might have finally hit upon the argument that makes sense for keeping Miller.