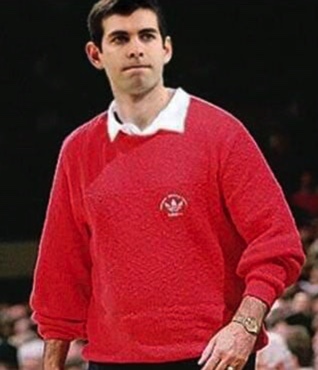 This picture will give goosebumps to IU fans, but seeing Brad Stevens in a red sweater on the sidelines in Bloomington is just short of an impossibility.

If Brad Stevens becomes available for Indiana University athletic director Scott Dolson to hire as basketball coach, he could pay for both Archie Miller’s buyout and Stevens’ contract in four hours by starting a Go Fund Me page.

I don’t wish Stevens ill will in Boston.  He is a tremendous coach and better human being.  I hope he keeps or gets whatever gig he covets.  ESPN’s Stephen A. Smith says Stevens is in trouble with the Celtics, and while I don’t pay much attention to his bleating or those of the other two hour per day pundits on ESPN and Fox, his thoughts about coaches sometimes make sense.

Archie Miller is also a guy I hope succeeds.  His four seasons at Indiana have been relentlessly mediocre, but I keep watching the Hoosiers because success seems so close – or at least it did.  Championships were promised when Miller was hired in 2017, and fans are still waiting for delivery.  I don’t know Miller as I do Stevens, so I can’t speak to the kind of human being he is.  Miller has not been willing to share much of himself to media or fans, so whether he is a great guy is an unknown, but I would still love to see IU win in bunches regardless.

What we do know is that IU needs to win its final three regular season games to finish with a winning Big 10 record for the first time since 2016.  That ignominious streak includes all four of Miller’s teams.  It’s also been that long since Indiana earned an invitation to the NCAA Tournament.  Fans are more than a little edgy about Indiana being a Big 10 doormat year after year, and are loudly calling for yet another change in coaches.

The last time IU went five straight years without going to “The Big Dance” predates it being called “The Big Dance.”  It was a small dance from 1968-1972, with only 25 teams bracketed, so being excluded did not bring the shame to the Hoosiers it does today.  Indiana is still projected in the tourney by some bracketologists, but with three tough games left, they still have a lot of heavy lifting to do to get there.

Stevens’ Celtics are two games under .500 with a game tonight against the Pacers.  If he can’t get better results, general manager Danny Ainge is far more likely to point at Brad as the cause than the roster he put together.  Ainge didn’t get to be general manager of the Celtics by accepting blame for his flaws.  If the Celtics don’t pivot from their current malaise, Ainge could decide eight years is enough for Stevens.

That might be the opening Indiana needs to hire the guy who attended so many IU games at Assembly Hall as a kid with his dad, and led Butler to back-to-back National Championship games in 2010 and 2011.  Stevens is universally beloved in his home state, and would be hailed as the perfect fit by the vast majority of difficult to please fans.

Stevens to IU is the long shot of long shots whether Stevens is retained by the Celtics or not.  The recruiting grind is not something NBA coaches enjoy when they consider a return to college, and Stevens would be an perfect fit for ESPN, Turner, or Fox if he wants to make some easy cash in media.  He would get immediate offers from other NBA teams as soon as his ouster in Boston was made known, so it’s not like Indiana would be his only option for gainful employment.

Stevens to Indiana would almost have to be the result of a calling – a siren song to that young fan who loved the Hoosiers growing up in Zionsville.  It would have to represent a dream come true, as the money and responsibilities would likely be at least as good elsewhere.

It would also take a weird confluence of timing.  If Indiana continues its downward slide and the decision is made to make a change, it’s unlikely Stevens would lose his job simultaneously.  Dolson is not going to sit with an opening until the NBA regular season ends for the Celtics on May 16th.

Indiana turning the corner with Miller as coach is a wonderful dream, and so is Stevens returning home to coach in Bloomington.

Both are roughly equal in their likelihood.