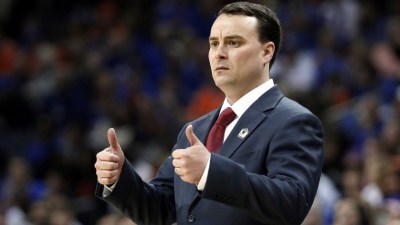 Archie Miller will be paid like a CEO for the next three years while drinking Cornas on a remote beach if he chooses. Two thumbs ups indeed!

People are talking about Archie Miller being fired as Indiana’s basketball coach as though he has passed away and requires mourning.

COVID did not get Archie.  He is not the latest cautionary tale of a young man without underlying conditions who was ravaged by the newest mutation of the virus.  He lost too many basketball games and provided no hope that IU’s fortunes would change in 2022.  There is no network of masks he could have worn to protect his job against the devastation caused by a four-year run of non-winning Big 10 seasons.  There is no vaccine to make safe a coach who doesn’t earn one invite to the NCAA Tourney in four years.

Let’s not weep for the destitution that could befall his family either.  Miller is leaving with an outlandish parting gift – $10.5 million guaranteed over the next three years.  Yes, he will be paid by Indiana in the same exact amount as he would have been if he still blew his whistle at Cook Hall.  That’s more money than you are likely to earn in your life in exchange for NOT doing his job.

Some in the media are saying that Miller deserved another year to prove himself, and I have yet to hear a good reason why.  Did COVID decimate his team?  No.  Did the first three years hint at breaking through the crimson ceiling established by the coach he replaced?  No.  Did IU fail to provide him with the tools and facilities needed to win.  No.  Miller just didn’t do the job.

Indiana under Miller just concluded the longest run of non-winning conference seasons since the end of World War I and Babe Ruth’s trade to the Yankees.  Yeah, Babe Ruth!  His career ended before the NCAA Tournament was ever dreamed of!  Bob Knight was more than 20 years from being born in 1919.

Sure, IU could have waited until eight years passed to admit its mistake – like Minnesota did with Richard Pitino, who was also canned yesterday.  What’s the point of that?  If athletic director Scott Dolson decided Indiana Basketball would be better served with a new basketball coach and the university didn’t have to reach into its own wallet to make him leave, that’s a pretty strong case to act right now.

Archie is 42 years old, and never has to work another day in his life.  That’s a pretty good haul for being historically mediocre at his job.  You and I should be that lucky for doing stellar work, much less for winning and losing in equal measure..

Indiana will move on.  So will Miller.  If he wants to coach again, there is no doubt someone will hire him.  Miller’s failures weren’t so egregious that he’s toxic to other potential employers.  Hell, Pitino already has been snapped up by New Mexico, according to reports.  Former IU coach Tom Crean got the Georgia job after a year of putting his feet up at ESPN, and Indiana scourge Kelvin Sampson is making a triumphant return to Assembly Hall this weekend as Houston’s coach.

Coaches always get another gig.

Save the grief and lamentations for those who deserve it.

3 thoughts on “Indiana Basketball – Save your tears! Archie Miller doesn’t need or deserve them!”