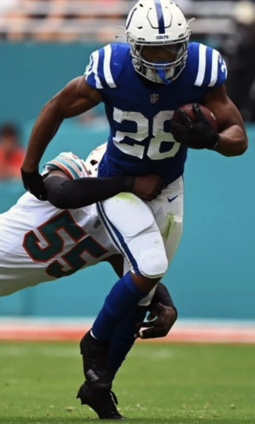 Jonathan Taylor is the closest thing the Colts have to a dynamic player, which means they can’t makes mistakes if they are going to win.

Hope is what gets us up in the morning.  It’s what makes life fun.  Sports mirrors life in many ways.  Hope makes sports fun too.

Yesterday, the Colts gave fans reason for hope.  The first three games – all losses – sucked a lot of hope out of Indianapolis.  But because the Colts beat the Dolphins 27-17 in Miami, hope is back, baby!  Forget that the Dolphins can’t stop the run or that Jacoby Brissett might be the most cautious quarterback in NFL history.  The Colts won, and that is a reason to feel good.

Gimpy Carson Wentz was clean and efficient with two touchdown passes to tight end Mo Alie-Cox and no picks.  The NFL’s leader in interceptions for 2020 has thrown to the other guys just once this season.  Jonathan Taylor was productive with 103 yards on 16 carries.

The defense was stout against the run, limiting the Dolphins to 35 yards on 16 carries.  Brissett was his usual self prior to the Colts taking an insurmountable 20-3 lead with 13:17 left.  To that point, he had completed 13-of-21 passes for a paltry (even by Brissett’s standards) 80 yards.  The Colts created two turnovers as well.  And how about Kemoko Turay‘s two sacks?

There were a lot of reasons in this game for Colts fans to embrace the notice of hope.  Football was finally fun again in Indianapolis, and I’m not going to crap all over that by telling you why this game should not fill you with grand optimism moving forward.  The Colts bubble will likely burst on its own – no need for the pins of logic to be wielded before it’s necessary.

Most NFL games are not won through excellence, but lost by the team that screws up the most. That was the Dolphins yesterday – and by a substantial margin.  Here is an incomplete sample of heinous errors that doomed Miami:

You don’t need an MIT degree to figure out that while this win belongs to the Colts, the loss is also owned by the Dolphins.  That doesn’t degrade the Colts effort – it just shows exactly how the NFL works.  Bad plays hurt worse than great plays bring pleasure.

Making fewer idiotic plays is a great way to win games, and for a team like the Colts lacking dynamism, it might be the only way.

So the Colts elevate their record to 1-3 while the Titans lost to the Jets in overtime to fall to 2-2.  Colts just a game back with a Lucas Oil Stadium Halloween tilt against Tennessee looming makes all things possible.

Who does Halloween better than Colts fans?

See, hope leading to optimism.  It’s fun.  Enjoy it, instead of whining about Frank Reich‘s call toward the end of the first half to go for it on 4th & 1 or a missed open receiver or two by Wentz.  Save that stuff for the next time the Colts are the team that screws up more often.