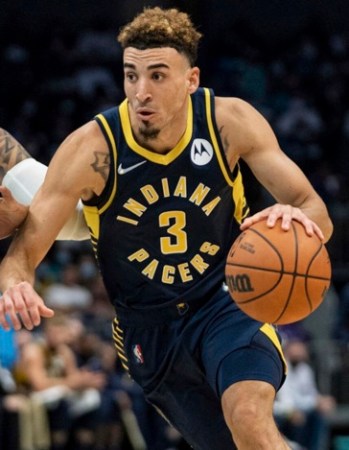 Chris Duarte is my favorite Pacers player of the season so far – which says as much about the other Pacers as Duarte.

That was the thought that rang in my head like the bell in a church where it is always noon as I watched their pathetic lack of effort in Toronto last night.  Basketball is dramatic, fun to play, and compelling as hell to watch when there is something on the line.  The Pacers played folded for the Raptors as though not even pride was at stake – maybe especially as though pride wasn’t at stake.

Basketball is a lot like music.  If a band goes through the motions playing their hits and serves as a walking and breathing jukebox without a captivating collective aspontaneity, people at a concert chat among themselves and treat the event as background entertainment.  Basketball provides the same opportunity to be a fascinating watch or a distraction from conversation.

Through five games, the Pacers have been more chatter than matter despite three very close contests to begin the season.  Because my wife was busy doing something more important than watching the Pacers lose in Toronto last night (a broad swath of potential activities), I was left to talk to myself – which is something you can see me do twice each day on my YouTube channel.  I asked myself a variety of questions.  Hear are 14 of them (in honor of Sam Perkins, one of my favorite Pacers):

Some of those questions are uneducated and reflect my angst in the moment as I watched the game.  I did not enjoy asking myself those questions – or answering them alone in our living room.  Maybe tomorrow night in Brooklyn the switch will flip and suddenly I will enjoy watching the Pacers again.  It can happen just that quickly.  That’s part of the fun of basketball too!

Overreacting to dismal starts is something that fans do, and I am a fan of the Pacers franchise.  A 1-4 start is hard to ignore – regardless of injuries.  Results always have a cause, and I’m afraid the cause for 1-4 is the same as the cause for my disinterest in our city’s NBA franchise.

I have great respect for Pacers ownership, affection for the management team, and a deep love of basketball.  So why don’t I enjoy watching this team right now?

3 thoughts on “Fourteen borderline insulting questions about the 1-4 Indiana Pacers!”