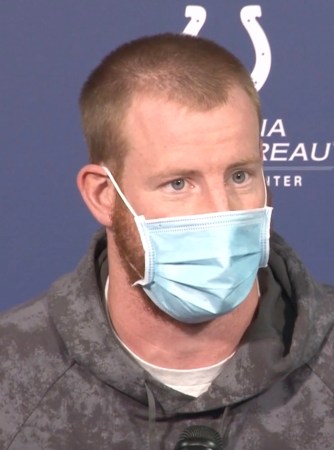 Carson Wentz came to the Colts for a third round pick and a conditional second rounder that moves to a first if he is able to take 75% of the snaps. That condition must not be exploited to maintain the first round pick.

The answer is, never.  You just don’t do it.  Screwing over the Eagles would be deceitful, short-sighted, pragmatic, and bereft of morality.

The question is – when do you shut Carson Wentz down so he doesn’t reach the threshold of snaps to kick that 2022 second round pick into the first round?

When the Colts made the deal with the Philadelphia Eagles to acquire Wentz, they shipped a 2021 third rounder and a conditional ’22 second to Philly.  The second rounder had a condition – if Wentz takes 75% of the Colts offensive snaps, the pick slides into the first round.

Given the Colts 3-5 record, fans are starting to get itchy about losing a first rounder for a quarterback who was not only unable elevate the Colts to Super Bowl contention, he’s so far failed to allow the Colts to maintain their position as a marginal playoff team.  Some fans are calling for Colts GM Chris Ballard and coach Frank Reich to manage Wentz’s snaps to allow the Colts to keep what could be a pick inside the top 15.

There are plenty of reasons to play Wentz – winning should always be the goal, other players are risking their long term health to compete, fans are paying to watch a team try to win, and there is still a possibility of earning a playoff spot.  That’s the short list.

But only one reason matters – Playing a healthy Wentz is the right and honorable thing to do.  A promise was made.  It should be kept.  Period.

I’m not sure when our society turned to avarice as its core principle, but those who believe Ballard and Reich should manage snaps for a healthy Wentz so the team can dodge a condition negotiated into this deal to cover the Colts should Wentz get hurt – as he often did with the Eagles – are Nixonian in their practicality.

The ends do not justify the means, regardless of the lessons our leaders teach on a daily basis.  The excuse-making, ass covering, and hoarding of assets at the expense of decency and the truth is every bit as big a societal problem as Covid, global warming, and homelessness.  In fact, it can be easily argued that greed has caused all three of those plights.

“But we need to win a championship, and a first round pick will help!” fans comment every day on my YouTube Channel.  I try to politely correct them toward an understanding that a championship built upon underpinnings of fraud and deceit doesn’t count for much.

Ballard has been relentlessly honest and decent through his four-plus years as general manager, so I am certain he would never manipulate a condition negotiated in good faith with a rival GM.  That is simply not the way he rolls.

Colts fans should applaud Ballard as a GM willing to keep his word rather than treat Eagles GM Howie Roseman as an easily duped sap for negotiating such an easily dodged threshold.

The Colts are unlikely to qualify for the playoffs whether Wentz plays 17 games or not, but that does not justify replacing him with back-up Sam Ehlinger.  There is no level of bounty worth subverting morality.  If Ballard didn’t want to give up a first round pick, the escalator should not have been part of the deal.

This is not a close call.  “Close call” implies there is gray area in this decision.  A list of pros and cons does not need to be produced to make this decision.  Promises must be kept.  Trust is ultimately important.  Liars suck, and so does unchecked greed.