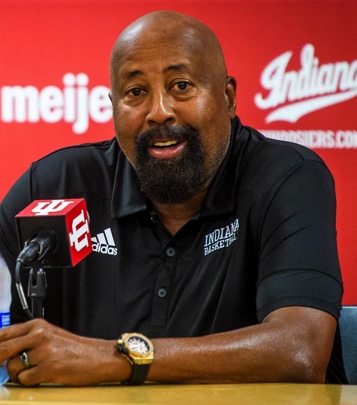 It’s all fun and game coaching at Indiana until losses start to stack up. Mike Woodson will never be as popular as he is right now – unless IU wins a sixth championship.

Only five days to Indiana Basketball’s first game of the season, and I’m getting nervous.

The last seven months have been filled with hope and optimism that the Hoosiers will be better than under former coach Archie Miller – good enough the earn their first invitation to the NCAA Tournament since 2016.

Miller getting the ax was a positive start toward a return to respectability, but the hire of IU alum Mike Woodson seemed inspired.  When coupled with the return of fellow alum Dane Fife as an assistant and Thad Matta in an administrative role, fans offered to donate bolts of red fabric for new banners.

Woodson is not only a coach who led the Atlanta Hawks and New York Knicks to NBA success, he cut his teeth as a player in Bloomington under Bob Knight.  The tether to Knight re-established a connection for those longing for a return of Knight – and Knight style basketball to Assembly Hall.  For so long, Knight was angry with Indiana and like children of divorced parents, some fans and former players were conflicted as to who to love more – their school or coach?

With Woodson bringing what he learned during the 41 years in the NBA and from 1976-1980 under Knight, nostalgic Indiana fans are hoping this year is different from all the years since Knight left (minus 2002 and 2013, which were anomalous in their prosperity).

Hope and all forms of that horrible word are what make me nervous.  I can remember how much fun IU Basketball can be when things are rolling.  I remember two of the National Championships very well, as well as the Cheaney Era that should have brought another banner if not for Alan Henderson‘s knee and Ted Valentine’s whistle.

I was smart enough to understand Kelvin Sampson and Tom Crean were ill-fitting leaders for the program from the moment I learned they were hired.  I heard that Sampson would be Mike Davis‘s replacement from an assistant of athletic director Rick Greenspan prior to the announcement.  He told me, “Well, we got our guy!”  I asked who it was.  “Kelvin Sampson!” he proudly exclaimed.

My brow furrowed.  I nodded, and said, “Oh, Kelvin Sampson…from Oklahoma.”  I tried to smile, but my facial muscles balked.  My teeth showed and my eyes widened.  I looked more like a mental patient than a happy IU fan.  With Crean, I felt the same strange disappointment.  But with Archie Miller, I wanted so badly to experience better basketball that I plugged into whatever shallow reservoir of hope I managed to protect through the mostly miserable years since the Cheaney Era.

Miller was not in basketball to win friends in media or Bloomington, and promised to recruit the hell out of Indiana.  That was enough for me.  My threshold for hope had eroded so far toward the end of Crean’s nine years that I would have embraced rock icon Steve Miller as IU Basketball’s next savior.

My hope was obviously ill-invested.  After four years of Miller doing a bad Crean impersonation as he clapped and profusely sweated on the sidelines, IU athletic director Scott Dolson agreed with Indiana’s fanbase that another change was due.

After trying to compel Brad Stevens with enough cash to make him the highest paid coach in college basketball history, Dolson set his sights on Woodson.  Knight approved, according to a statement over his name, and IU fans decided to embrace that evil little word again.

It has always been thought Indiana should be coached by an Indiana guy, and that the obvious path of succession of leadership veered far off course as the battle of leaders pitted two titans of hubris – then IU president Myles Brand and Knight – against one another.  Neither won, and IU fans were the losers.  Woodson might just might make this right again – as though the intervening 20 1/2 years were a just a bad dream.

On Tuesday, Woodson will reveal to Indiana fans, alums, and boosters what can be expected in his first season at the helm.  If defense is hard-nosed, open shots are made, and players are held accountable, the IU faithful will feel like their program is back, baby!  If wins come in bunches, all the better!  If hopeful resolve remains through Selection Sunday, we will log onto Travelocity to see about flights to the location of the Final Four (which I have not looked up for fear of jinxing things).

If this grand experiment fails, what then?  The missing links that have been discussed for 20 years will have proven as valueless as Archie’s packline defense.

From where does hope spring if this doesn’t work?  That is why I am so nervous about Tuesday night’s game against Eastern Michigan.