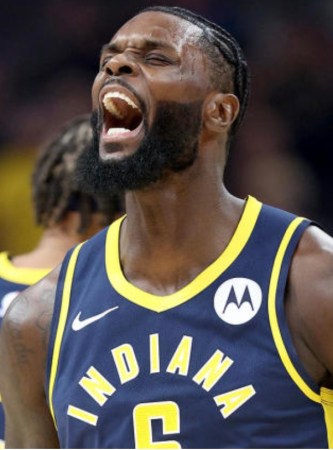 Last night, Lance Stephenson came home to the Pacers, and all was fun and right with professional basketball in Indianapolis.

Bubbly fun came back to the Indiana Pacers last night.

The Pacers have been the flat beer of the NBA this season, but last night fans finally got some carbonation from an old friend.

Yes, the Pacers lost – again – but there was a joyful presence on the Gainbridge Fieldhouse court for the first time in years.  Lance Stephenson returned, and he brought his game with him.

Lance scored the Pacers last 20 points of the first quarter on eight-of-nine shooting.  No Pacer had ever scored 20 points in a first quarter until last night, but it wasn’t the points that mattered.  It was the smile and infectious energy that has been lacking for so long, I forgot what it was like to see fun happen while watching the Pacers.

At best, this most recent iteration of the Pacers has been competent.  At worst they have appeared disinterested – in basketball and the community they call home 41 nights each season.  There are reasons the Pacers sport a 14-25 record, and they aren’t just injuries and Covid.

Even when the Pacers win, it appears players are employees performing tasks they tolerate in order to earn their paychecks.  They have been factory workers who punch a timeclock.  Clock in – dribble, pass, shoot, rebound, defend – clock out.  People don’t buy tickets to watch assembly line staffers build cars and accountants do taxes, and there is a reason the Pacers are last in NBA attendance.  Fun is a necessary component of basketball, and the Pacers are so starved for it, a relic on an emergency 10-day Covid contract was needed to remind them.

There was pregame video of Lance embracing Nancy Leonard, Slick’s widow, outside the locker room.  It served as a reminder of a time when Pacers lived here – and felt like they belonged here instead of treating Indy as a place where they play 41 additional road games.

Then Lance went to work, and his work was as annoying to the Brooklyn Nets as it was thrilling for fans.

Kevin Durant and Deandre’ Bembry picked up technicals as they barked toward officials after Lance played them tough, and we were reminded what it is like to have a Pacer make basketball a competitive test rather than a passive pageant.

There was fire and fun fueled by an old friend in the Fieldhouse last night, and it was so enthralling, I never considered watching anything else – even when the game was obviously lost.

Lance was such a pest that Durant raised his game and put on quite a show, with 39-points the Nets needed because Lance turned the game into a battle.  It’s been awhile since a great player’s A-game was fueled by his anger toward a Pacer.  It might have been since Lance blew in LeBron’s ear.

Here’s hoping Pacers president Kevin Pritchard signs Lance to a deal that will last for the rest of this season and maybe next.  Even if the 20 straight points (Lance is currently the only NBA player this season to score 20 straight) was a magical occurrence never to be repeated, at the very least Lance brings fun and drama to a team sorely lacking both.