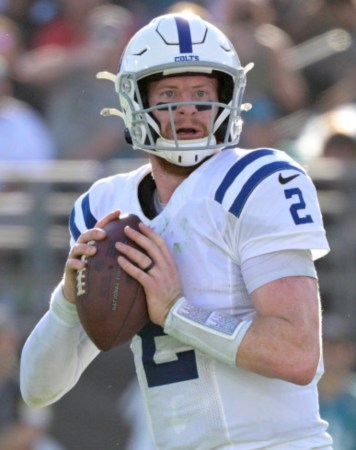 Is Carson Wentz capable of playing at the level of the AFC quartet of young quarterbacks (Mahomes, Allen, Burrow, Herbert)? The easy answer is no.

The differences between the teams that showed themselves this weekend as the best of the AFC and the Indianapolis Colts was obvious.

The primary asset possessed by the Kansas City Chiefs, Buffalo Bills, and Cincinnati Bengals but absent from the Colts was a quarterback who can lift his team with the game on the line.

This is not an indictment of current Colts QB Carson Wentz.  It is not Wentz’s fault he is not Patrick Mahomes, Josh Allen, or Joe Burrow.  He is who he is – a physically impressive guy who processes information too slowly to throw receivers open, hit checkdowns to his dynamic backs, or muck plays to avoid sacks.

Burrow is less perfect than Mahomes or Allen, as evidenced by the nine times the Titans put him on his backside Saturday, but he and his weapons were also dynamic enough to overcome those nine potentially game changing plays against the top-seeded but flawed Tennessee Titans.

There are those who will point at the other major Colts deficiency to deflect blame from the quarterback issue.  Dynamic receiving duos are employed by all of the AFC elite.  The Chiefs have Tyreek Hill and Travis Kelce for Mahomes to throw to.  The Bills have Gabriel Davis and Stefon Diggs for Allen.  And the Bengals boast JaMarr Chase and Tee Higgins for Burrow.

The Colts have Michael Pittman for Wentz.  Beyond that, it’s a pauper’s buffet of the oft-injured T.Y. Hilton, the oft-er injured Parris Campbell, excellent blocker Zach Pascal, special teams ace Ashton Dulin, and Dezmon Patmon.  Pittman is a solid #2 for the Colts, who lack anything resembling a #1.

Whether the Colts primary source of roster weakness is quarterback or receivers discounts the obvious answer that both spots require aggressive and immediate upgrades if the Colts are going to compete with the AFC elite.

Colts general manager Chris Ballard has unapologetically continued to build from the inside out – meaning the quality of depth along the offensive and defensive lines are believed to be the most critical elements to the Colts success.  I get it – protecting your QB and attacking theirs is important – but that wasn’t a left guard or defensive tackle sprinting away from the Bills defense last night or crossing over a Chiefs defensive back to spring wide open for a late TD.

Yet in his season ending media availability, Ballard lamented the lack of eight quality defensive linemen as something to be addressed this offseason.  EIGHT!  Quick, name the starting defensive line for the 2014 Colts – the last time they won the AFC South!  Here they are – Ricky Jean Francois, Josh Chapman, Cory Redding, and Erik Walden!  At quarterback – Andrew Luck.  Weapons – prime T.Y. Hilton, aging but productive Reggie Wayne, and better than you remember tight end Coby Fleener.

Ballard should spend this morning asking himself if he can even name one of the starting defensive tackles or offensive guards of the Bengals, Bills, Chiefs, Rams, or 49ers.  He will point to Rams future hall-of-famer Aaron Donald, and say, “See!”  Then he will realize the teams remaining in the playoffs (plus the Bills – likely the second best NFL team) are there because of their exterior weapons and quarterbacks who know how to get them the ball in space.

Without a first round pick this year because of the trade to acquire Wentz, the Colts have limited resources to make meaningful upgrades, especially if Ballard eschews free agency as a talent acquisition tool, as he usually does.

One way or another, the playoffs expose the reason for a team’s mediocrity.  Just because the Colts failed to qualify doesn’t mean they couldn’t pay close attention to the weekend’s games to see the cause of their mediocrity to pivot toward a roster ready to compete with the AFC’s best.

The 2022 schedule is brutal, so they will not be protected by their opponents often enough to roll this group back and succeed.   The Colts play the Titans twice, Chiefs, Steelers, Patriots, Cowboys, Eagles, Raiders, and Chargers.  They also get two cracks each at the Texans and Jaguars, and games against the Giants, Broncos, WFT, and Vikings, but as they showed against the Jags on January 9, no cupcake is cupcake enough in the NFL to guarantee a win.

These are strange days for a Colts franchise that had such high hopes prior to postseason robbing losses to the Raiders and Jaguars.  The obvious needs to bridge the gap between the Colts and two AFC Championship competitors are clear, but opposed to Ballard’s preferred path.

(Must have been nice for current Colts defensive coordinator Matt Eberflus to read an entire column about Colts changes without seeing his name in it.)