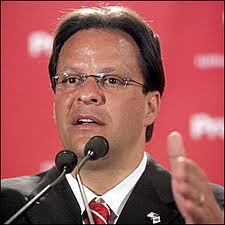 It’s easy to pile on Indiana Basketball coach Tom Crean given the Hoosiers losing streak, 3-13 conference record and the apparent continuation of Indiana’s run of seasons without a postseason appearance.

Calling an Indiana team a success would be ludicrous when they will have to upset one of its two remaining regular season opponents or win the first round game of the Big Ten Tournament next Thursday to win more than it’s current total of 12.

But that doesn’t negate the progress the Hoosiers program has made in the past three years.  Much of that progress is on display this week in high schools throughout Indiana, and will be evident beginning next month as summer team tournaments get revved up.

In the spirit of looking forward instead of back, here is a list of the top five things Tom Crean has done right since agreeing to try to lead the Hoosiers out of the swamp into which Kelvin Sampson dragged the once proud program:

As long as the high school kids see Indiana as THE place to play, the current players fight like hell, and the students are in lock step behind Crean, I’m willing to believe he’s marching toward banners and not a sheer drop.

There will be doubters – there are always doubters, but there is no tangible reason to doubt that Crean is doing the right things, and that makes him the right guy to do them.