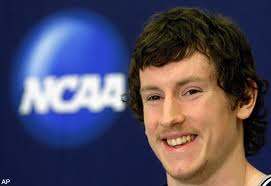 Matt Howard is getting a lot of attention, and the media is focusing on some of the traits that make him such a unique kid.  Some view him as quaintly off-kilter with his rusty bike, floppy socks, and somewhat erratic hair.

When Butler plays Wisconsin tonight at 9:57 p.m. tonight in New Orleans, a lot of eyes will be on Matt, and their image of the 6’8″ power forward and Academic All-American for those who have read the many pieces will be of a hard-working kid straight out of the pages of “Little House on the Prairie”.

What Matt Howard is is purely himself.  He makes decisions based upon what he believes is right, and that’s it.  Peer pressure means nothing to this guy, and it never has.  He is Matt.  Just Matt.

if you want to know Matt, get to know his family.  His dad Stan is America’s most popular postman.  He grows a beard during the winter and shaves during the summer.  Why?  I never asked.  An outstanding athlete and pitcher as a kid, he is a sweet, decent, friendly, and shrewd guy.  I sat at summer team practices and talked to Stan for hours.  He’s smart and affable.

Linda is Matt’s mom.  She is perhaps the most nurturing and honest woman in the world.  Four years after our sons played endless games for the Spiece Central Stars, Linda and the entire family still greet us like family, and we do the same.  I have never seen Linda unhappy.  Ever.  Stan can get a little nervous about things, but Linda is happy all the time.  Her head is screwed on as right as anyone in the world.

Matt has many brothers and sisters who are all incredibly friendly, likable, and sharp.  They smile easily, and have been smart enough to enjoy every minute of the trip Matt is on as a basketball player and young man.

Yes, Matt likes to exchange the first letters of the first and last names of people he meets.  Zach Hahn is called Hack Zahn, not just by Matt, but by most of the kids with whom they played.  He wear old socks because why where new ones.  He rides a bicycle in the cold to workouts.  He’s droll to a point where if you don’t know him, you have no idea whether he’s trying to be funny or not.  Matt cuts his hair when the mood strikes him.  I’m not sure what the schedule is, but when he gets it cut, his money is well spent.  He’s earnest and welcoming, and will sign autographs at Hinkle Fieldhouse after games until the lights are turned out.  Then he moves into the hallway and signs for the rest.

But that isn’t who he is.  Those are the traits he exhibits.

Matt is the best teammate a basketball player ever had.  The majority of players looking for a scholarship turn a little selfish as they try to get theirs.  Matt was accurate and resolved in getting the ball to open wings.  His passes weren’t and aren’t afterthoughts; they are delivered accurately to guards who are forever thankful to play with someone that focused on the team’s success ahead of his own.  That’s not recognized as on-court leadership these days, but it should be.

With the media, Matt is good-humored and patient.  For a young man who is very comfortable in his skin (he would say, ‘whose skin should I be comfortable in?’ without getting the double entendre) he is as forthcoming as you might guess, and he’ll talk until the reporter gets what he or she wants, and right now they want a lot.

Matt is the star of the NCAA Tournament so far as he has scored the winning points in two straight nail-biters, which is a gift from God for all the parents who are raising kids who are fascinated with basketball because he is genuinely what parent aspire their kids to be.

There is no compromise to Matt.  There is no dark side.  There is only light where this kid goes.  To reduce that to floppy hair and socks is trite, and cheapens his genuinely special qualities.  The media wants to reduce the kid to an easily consumed colloquialism, that’s fine.  I won’t.

Matt’s college basketball career will end in the next 11 days, maybe tonight, but his legacy will last far beyond that at Butler and for everyone blessed enough to know his entire family.

There is no way that Matt would embrace this, but Butler should not only retire the #54 and hang it from the rafters at Hinkle Fieldhouse, but should erect a statue of the kid out front so people are constantly reminded of the time when a true student athlete excelled and represented that university with a dignity and individuality that we should all emulate.

Brad Stevens was smart enough to see when he recruited Matt, and now the country sees it.  And we are better for it.  Enjoy watching him tonight.  Matt Howards don’t come along very often.