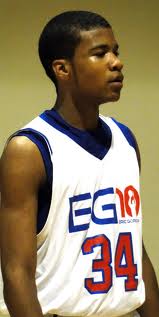 IU head coach Tom Crean picked up another commitment for his outstanding 2012 freshman class as Lawrence Central’s (IN) Jeremy Hollowell chose the Hoosiers over Cincinnati, Ohio State, and Purdue.

As with any brand, success breeds more success, and Crean hasn’t lost many battles for Indiana preps since getting a verbal from Hamilton Heights Austin Etherington.  Cody Zeller was the big fish who opened the flood gates for these 2012 kids, and Indiana kids have taken notice and continue to line up to help get this program back on track.

Hollowell has the potential to be a big part of that effort.  He’s ranked 37th, 38th, and 39th by the big three ranking services, and can be as good as he wants to be.  What Hallowell is, Indiana does not currently have.

For those who have trouble counting to five, that is how many have now committed for 2012, and that’s a lot.  For a team with two incoming freshmen, two returning sophomores, and five returning juniors, that would bring the total of players on scholarship in the fall of 2012 to 14.  If Matt Roth applies for a medical redshirt, we hit 15.  And Indiana is still tenaciously pursuing Hamilton Southeastern’s Gary Harris.  That’s 16.

Crean doesn’t need IU’s Finite Math wizard Maynard Thomson to draw a Venn Diagram (who said the money spent on my education was wasted?) to show that 16 is greater than 13 by three.  And it’s not for me to question who the odd men out will be.  That’s a conversation for the families of players at Indiana to have with Crean.

My bet is that somehow they wind up at the right number, and that those kids will be ready to compete.  Hollowell is another thick brick in a formable wall of the house that Crean is building.