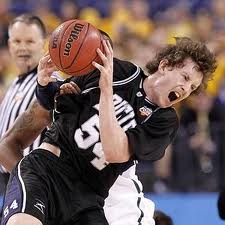 From the first NCAA Tourney in 1939 through 2009, Butler advanced to the Sweet Sixteen twice and the Elite Eight exactly zero times.  In Matt Howard’s junior and senior years, they have done both twice, and are 40 minutes from their second straight trip to the Final Four.

This is not to diminish the importance of seniors Zach Hahn and Shawn Vanzant, but focusing on Howard only makes sense given his production over his career, and in the three tourney wins this year.  You can bet that Zach’s burning need to compete fuels the Bulldogs’ work in practice, and there is no doubting the benefit of Vanzant’s recent offensive production (11 ppg) and defensive excellence as reasons contributing to Butler’s success.

But it’s Howard who is the face of this team.  He’s not Jimmer Fredette, but than again, Jimmer is already back in Provo.  Outplaying better known and regarded players is nothing new for Howard, who outplayed Kevin Love every time the two matched up in summer ball.

People like to talk and write about the quirks that make Matt good copy, but the fact is that he is a hell of a good basketball player with a weird skill set and surprising strength.  He’s two-handed around the bucket, and has a very strong core.  Where a lot of big guys have the cut up arms and chest, Howard’s upper legs and trunk are rock hard and thick.  He roots out defensive players and gets to the block exceptionally well.  He also blocks out exceptionally well.

Howard has always flunked the eye test.  Kids from the Atlanta Celtics and dozens of other teams in summer ball would watch his team go through warm-ups and scoff.  Down 12-2 after the first two minutes, their coaches always called a frantic timeout.

Always underrated, and always productive.  Especially in big games, Howard has always come through.  Even Butler fans look at the future with a smile.  Shelvin Mack, Ronald Nored, and Andrew Smith return and Howard’s numbers can easily be replaced.  If they start rattling off statistics and measurables, they just don’t get it.

If George Clinton and the P-funk All-Stars bring the funk, Matt Howard brings the clunk.  He is clunky personified, and it’s worth a laugh until you go up against it.  Unlike any big in college basketball, Howard does nothing by the book, and everything productively.  For opponents, Howard is the face of their frustration.  They can’t figure out why they can’t outplay him, but they don’t.

In “Friday Night Lights”, coach Eric Taylor’s chant is “Clear eyes, full hearts – can’t lose!”  No one’s eyes are clearer, and no one’s heart is more full than Howard’s.  He believes in his teammates, and that fuels the supposed upsets that Butler notches one after another.  Teams don’t go 8-1 over the past two NCAA Tourneys without believing they should win those games and Matt is the kool-aid that fuels that belief.

Teammates say he’s weird.  People write that he’s quirky.  Matt believes so completely that it convinces others to believe, and pretty soon that thing they believe in becomes reality.

After last night’s win, coach Brad Stevens said, “I don’t believe this group goes into games not believing,” and he’s right.  Matt Howard believes – always.  Prevailing wisdom does not invade Howard’s mind.  Howard believes completely in what he believes, and the supposed experts and their opinions aren’t granted access to Howard’s doubt center.

Basketball for Howard isn’t about hope; it’s about work.  It’s about figuring out a way to win every possession.  That is becoming a significant part of the Butler Way, but it was Howard’s way long before he got to Hinkle Fieldhouse.

Butler will tee it up Friday, trying to post their ninth NCAA win in 13 months after winning eight total in their history prior to that.  They will be the eighth seed playing the second-seeded Florida Gators, and the Bulldogs will once again be the underdogs in all but the minds of 20 guys, and that belief starts with Matt Howard.

It will be interesting next year to see whether this unprecedented run of success is because of a team playing the Butler Way, or the Matt Howard Way.

9 thoughts on “Butler Basketball’s NCAA Success – Is it the ‘Butler Way’ or ‘Matt Howard’s Way’?”