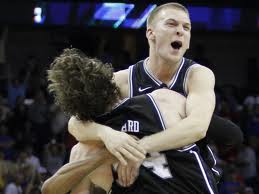 Zach Hahn and Matt Howard celebrated 24 summer tournament titles before they ever played for Butler University.

I’ve written often about a class of 2007 summer team that played together without ego, a lack of concern for being recruited, and a love for one another that oddly remains the exception to the rule in youth basketball.  With the successes of Florida Gulf Coast, LaSalle, and Wichita State in last weekend’s first two rounds of the NCAA Tournament, columnists are writing rhapsodies to the three-star kids who are still dancing while the five-star kids at Kentucky are back in Lexington after a first-round loss in the NIT.

That team, together as a unit for three summers ending in 2006, won 90% of its games against the best talent in America.  Getting coaches to look at these guys was tough, and to get them to like what they saw was even harder.  As individuals, they weren’t tremendously long, able to jump out of the gym, or incredibly quick on defense.  But they won – almost always.

Many high major coaches felt like they wasted their time watching the ironically named Spiece Central Stars.  Several said they would not be coming back, showing the same lack of respect that opponents shared during warm-ups as they smiled watching this group of non-stars.  As the Stars would go through their pregame routine, opponents would gawk and smirk.  Once the game started, the smiles turned upside down as coaches called an early timeout down 12-2 or worse, the victims of outstanding shooting and precise offensive execution.

Better than the games were the practices.  Getting to the Lawrence North gym first, where the team worked twice each week from April 1st to July 31st, was the biggest challenge.  Dennis Ziegler from Pike High School in Indianapolis joined the team for the summer between his sophomore and junior seasons.  He arrived at 6:00 p.m. – exactly on time for his first workout with his new team – took four steps, and gawked at the nine new teammates that had already worked up a sweat running their pre-practice practice.  No one allowed themselves to show up later than 5:30p for a 6p practice because what could be more fun than working at the game they adored with the teammates they love.

And when the whistle blew, the focus was tremendous.  Perfection was the goal as the kids would shout out the number of shots in a row they hit.  After the 90-minute practice, it was time for more shooting because being better than the other guys at anything means working harder at it.

In the hotels on the road for tournaments, all the teammates hung out in the same room laughing at whatever was on TV.  Then they would meet in the lobby, get in the van, and beat the hell out of everyone in front of an indifferent smattering of coaches.

There were exceptions.  We saw a whole lot of Butler assistant Brad Stevens, IPFW’s Dane Fife, and there was usually someone from Purdue – even in pool play games.  Frankie Smith from Miami of Ohio was around a lot too.

It was time well spent for Stevens because Matt Howard and Zach Hahn helped change the Butler program – leading them to back to back National Championship games.  Fife got Ben Botts for his time in non-descript gyms, and Ben rewarded him with 1,400 points scored on 44.5% shooting from beyond the arc.  When Fife took the IPFW job as a relative youngster, I asked an expert of Indiana college hoops about the move.  He said it was terrible for Fife because winning more than 10 games there was an impossibility.  In Ben’s senior season, IPFW won a school record 18 games.  What did Purdue get for watching the Stars?  A skinny kid that every other high major who took the time to look at passed on until it was too late – JaJuan Johnson.  JJ helped the Boilers to 107 wins and a 54-18 record in the Big Ten during his four years before being drafted by the Boston Celtics.

Nate Blank went to Gardner Webb, beating Kentucky as a freshman and getting his picture on the cover of the USA Today sports section.  Joe Hughes went Xavier, where he is #2 all-time in wins for the Musketeers.  John Ashworth took his cerebral game and card tricks to IUPUI, and Ryan Sterling worked hard at Loyola of Chicago.

Not surprisingly, several of the kids are coaching, others will go to law school, and one is doing both.  They knew how to play, and the teams that invested in those kids helped programs win at record levels.  Those coaches who took the time to understand what they were watching were rewarded.  Many of the rest are looking for work.

Assembling a team isn’t only about aggregating the most impressive array of talent.  Butler learned that the fun way in 2010 and 2011.  Kentucky learned it the hard way in 2013.

College basketball fans are being reminded of it the fun way this month as FGCU, LaSalle, and Wichita State shock everyone but those kids who already knew how good they were.  Diligence, purpose, and love win games and hearts no matter how many stars are next to a name on rivals.com.