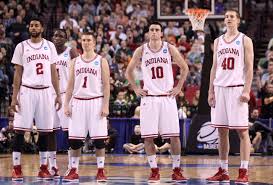 The bodies filling these jerseys will change, but the expectations they allowed fans to build will remain.

The re-emergence of Indiana University’s basketball program has been a steady upward climb since the remnants of the grim Kelvin Sampson era walked out the door after not finding new coach Tom Crean to their liking.

But like every climb, up can only be so high, and now after rising to the top of the rankings and being eliminated in the Sweet 16 for the second straight year, the question of whether the top of the mountain has been reached is legitimate.

Crean is incredibly popular among students, not quite as popular within the athletic department, and a polarizing figure among alums.

Depending upon the decisions that will be made by junior guard Victor Oladipo and sophomore Cody Zeller to either return to Bloomington or forego their eligibility, the Hoosiers will return one, two, or three starters.

Assuming Oladipo and Zeller both leave, Indiana will start Yogi Ferrell, Will Sheehey, and a collection of parts that may include Jeremy Hollowell, Remy Abell, Hanner Perea, Peter Jurkin, and the incoming freshmen.

That class of freshmen is ranked in the top five nationally, and features spectacular athletes in Noah Vonleh and Troy Williams.  Stanford Robinson, Luke Fischer, Devin Davis, and Collin Hartman will also report to Bloomington, and Austin Etherington will return from injury.

Is that a combination of tools that can keep Crean’s Hoosiers at or near the top of the Big Ten?

After relying upon the best that Indiana high schools had to offer in last year’s class, Crean spent a little more travel money to  recruit four of the six incoming freshmen.

Vonleh is a 6’9″, 222 lbs. freak of vertical mobility.  Williams, 6’6″, 190 lbs., is lean but also a kid who brings tremendous athleticism.  Robinson is a playmaking wing.  Fischer is a prototypical 6’10” Wisconsin big man, which means he’s skilled and likes to step out to shoot it.

Davis and Hartman round out the class.  They are similarly sized (6’6″) kids from Indianapolis.  Davis can drive to the hoop, and Hartman is a solid shooter who plays team first basketball.

Because Indiana was such an experienced group this year, it’s hard to evaluate the 2012 class, much less a class that hasn’t graduated high school yet.  How good can Perea be?  Who knows.  Jurkin?  No clue.  Hollowell?  We’ve seen him, but it’s hard to have any idea what his ceiling is based upon this year.

Ferrell and Sheehey are the only known quantities, and they are solid players who can contribute to a successful team.  Fans have seen that.

It’s going to take a bunch of guys stepping up or stepping in to help the Hoosiers maintain the high level of play the 2013 team established.

If the Hoosiers do take a step back, the fallout won’t likely cost Crean his gig.  The buyout of the contract extension he signed in November is $8-million for the next two academic years, but then drops to $1-million after 2016, and finally $500,000 for the final four years.

Expecting routine trips to the Final Four is absurd, but with Indiana making only one trip (11 years ago) in the last 20 seasons, fans are getting antsy.  Only one #1 seed advanced to the Final Four this season, and Syracuse is going for the first time in a decade.

But this is Indiana, and in Indiana the talent ripens early, the facilities are the envy of 99% of the other programs, and the resources are plentiful.  The way SEC schools feel about football is the way Hoosiers feel about hoops.

If a coach doesn’t like the constant stratospheric expectations, Bloomington is not a great career destination.

The climb needs to continue, and while hanging banners is always the goal, the key is for there to remain hope for the fanbase that was pissed on by Mike Davis and Kelvin Sampson.  At some point, not being Davis or Sampson will not be enough for Crean, and that time may come a year from now.

The kids at Indiana graduate, it appears they behave as is demanded of them, their work ethic is beyond dispute, and the NCAA hasn’t found anything strange in the methods Crean employs to attract recruits.  Now all they have to do is continue to win enough to make filling out the March Madness brackets fun.