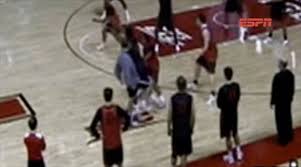 Mike Rice’s behavior will cost him his gig today.

Doing what’s right doesn’t matter a damn to most administrators, and Rutgers athletic director Tim Pernetti said as much yesterday.  The right thing would have been to fire basketball coach Mike Rice as soon as anyone with the authority to do so saw the videotape showing physical and verbal abuse the first time.

Pernetti told WFAN yesterday, “The reaction — we knew what it was going to be. I need to sit here and think about what gives us the ability to be effective going forward in men’s basketball, and more importantly, what protects the university. There’s a lot of things on my mind right now that I’m thinking through and trying to make sure that whatever decisions I make on a going-forward basis, that we try to make the right one.”

The translation of “protect the university” is “protect my job”, because the most important thing to a man like Pernetti is to maintain his $450,000/year gig.

There are many calling for Pernetti’s head along with Rice’s, and they are of course right.  Pernetti showed a complete lack of leadership in evaluating the severity of Rice’s actions by fining, suspending, and requiring sensitivity sessions for the runaway anger train of a head coach.

The question many are asking is what does a coach have to do to prove himself unworthy of continued employment at the state university of New Jersey.

What administrators loathe more than anything else is noise, and everything Pernetti has done to this point has been designed to not cause noise.  Noise is defined as phone calls, lawsuits, questions from servers and patrons in restaurants, and the long conversation at home with a wife very concerned about their nice lifestyle being downsized.

Of course Pernetti should be canned immediately for putting his own needs ahead of the kids whose college life he oversees, but that’s a coin flip.  University presidents like noise even less than ADs, and whether Pernetti is fired will be determined by whether it will turn up or down the volume.

The call isn’t close for Rice.  New Jersey Governor Chris Christie is now a part of the process, as are LeBron James, Ray Allen, and every columnist in America, and there are very few that could justify retaining a man as unbalanced as the guy we have seen every hour on Sportscenter since yesterday afternoon.

Pernetti will try to mitigate the shrieks from the outraged millions by firing Rice today, and then Rutgers president Robert Barchi will make his call.

The only problem here is that Barchi also watched the tape prior to the suspension and fine that passed for a corrective measure.  The reason Rice wasn’t fired was to try to keep all the practice chaos on the down low.  A termination would require more than an explanation that Rice displayed conduct detrimental to the goals of the university.  The specifics would cause a serious backwash, and with a backwash comes?  Class?  Class?  That’s right – noise.

Pernetti isn’t some jackwagon like a lot of ADs who underestimate the media because Pernetti had a great career in media prior to accepting the job as AD at Rutgers.  He ran college football coverage at ABC and helped found the College Sports Television Network.

When he says that he knew what the media response would be to the video, he’s not lying.  He also knew that the key to things being okay for both he and Rice was time.  If they could somehow kick the ball far enough down the road, they could claim that he had taken serious measures to correct the emotional imbalance that caused the violent outbursts in practice.

Now, there are reports that two Rutgers players are transferring.  The USS Rutgers Basketball is sinking because Captain Rice has steered it into some rocks, and the head of the navy allowed him to continue as the pilot.

There is going to be another call today to Pernetti, and perhaps to Barchi.  It’s going to come from Big Ten commissioner Jim Delany, who is going to express concern about the publicity that will attach itself to the conference when Rutgers joins the Big Ten in 2014 if Rice is still the coach.

Pernetti took a shot to cover his ass with the suspension and fine.  Rice is done as a leader and recruiter.  Kids are jumping ship, and parents whose kids were considering the Scarlett Knights have crossed them off the list.  The only question to be answered is whether Pernetti can survive the dereliction of leadership that allowed a lunatic to remain as a mentor and leader of young student athletes.

The next step will be taken quickly as Mike Rice is told to pack a box.  Whether that quiets the noise for Pernetti and Barchi, we will find out before the weekend.