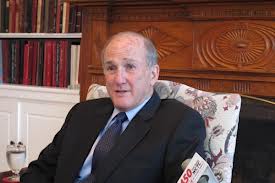 Rutgers president Robert Barchi’s performance in his ill-advised press conference demands his removal as president – not because he behaved in opposition to the expectations of the board of governors, but because he delivered upon them.

Anyone who has spent a lot of time talking to publicly compensated bureaucrats watched Barchi with the expectation that he would perform exactly as he did.  People ascend to the position of university president because they are honorable and eager to do the right thing.  They are hired because when bad things have happened elsewhere, they were smart enough to avoid having anything stick to them.

Barchi didn’t go to any Herculean lengths to try to deflect blame for the mess resulting from basketball coach Mike Rice hurling balls, epithets, and physical abuse at his players.  He reflected his character by feinting, dodging, and flippantly dismissing the notion that he should have watched the video showing very plainly the abuse.

The odd part of this – and I would say hilarious, but there are thousands of parents of Rutgers students paying outrageous amounts of money to be led into adulthood by people who work under Barchi’s direction – is that there is no way that Barchi sees any of his behavior is wanting in any way.

It is a virtual certainty that he sees his performance during the press conference as exceptionally effective.  Through the twisted and wobbly prism of university-speak, he was excellent.  For fans of logic, it was perplexing and repugnant.

I can’t count the number of meetings I have sat in with people like Barchi who spend hours saying nothing.  The mind-numbing droning of people interested only in watching the clock spin without contributing anything negative drains the life out of anyone within earshot.

The game for Barchi and the thousands of others like him is to be as risk averse as possible.  That nothing positive is ever contributed is of no consequence to them.  Assess and deflect is the strategy that builds homes, buys boats, and allows for career ascension.

ESPN’s Jay Bilas has looked like his head would explode all day, and for good reason.  He’s a guy that believes in acting logically and with decency.  Despite being an attorney, Bilas has maintained the brain of a bold member of society who calls bullshit when appropriate.

The world Bilas is criticizing orbits a different sun – one that is neither cold nor warm.  The orbit has no purpose other than to continue its orbit uninterrupted.  And the people in that world smile and quip and point at others.  Strength is weakness and weakness is strength.

That is the world of academia, and Barchi knows how to inhabit that world.  Another frequent target of Bilas is a kingpin there.  NCAA president Mark Emmert has made that clear throughout his career, and most recently in his similarly baffling press conference.

It’s not that Emmert and Barchi are experts at dodging the logical arguments of Bilas and those like him.  They don’t understand them at all.  It’s like Bilas is speaking a different language because logic means decisive evaluation, and academics have no use for such indulgences.

IMac users have no idea why anyone would ever buy a Dell, and Dell users think IMac fans are dolts.

So we are left with confusion everywhere, and a generation of college students – especially at Rutgers – wondering why adulthood is something to be embraced when clearly it has nothing to do with advanced thought or addressing what makes life worth living.

A sad story continues to unravel, and because the logical outnumber the bureaucratically gifted, Barchi will have to go.  He will be replaced by another guy with no goal other than deflection and kicking the can down the road until a job at a school willing to pay him more calls.

Barchi will go eventually, but the kids at Rutgers will be stuck in the same boat – just like all the other students at public universities run by pedantic wonks.  Good luck to all of us.