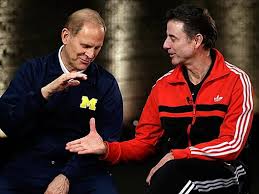 After two-and-a-half weeks of craziness, the matchup between Louisville and Michigan is hardly an upset.  Louisville was the overall top seed, and Michigan was a millimeter away from a putback dropping to tie Indiana for the regular season Ben Ten Championship.

Tonight at 9:23p, the Cardinals and Wolverines will play 40 minutes of basketball to decide a winner of the most viewer friendly championship event in sports.

Despite the late start time – an attempt to engage the west coast population, while ignoring the school bound kids in the east aside – the game is a sexy and fun matchup between two teams with a lot to like.

Michigan has the National Player of the Year in Trey Burke and the best freshman in the tournament in Mitch McGary.  Louisville counters with superb point guard Peyton Siva and the mercurial Russ Smith, who can score – or not – depending upon whether he gets hot.

Key to the Championship

The key to the game for Michigan is to limit the inevitable second half Louisville run to 8-2, or something that doesn’t even appear to be a run.

Louisville will turn up the energy on their press, and try to generate transition offense with their defense.  If Michigan can attack that press successfully to create their own offense, they win.  Forget about the McGary (17 points/12 rebounds per game in the tournament) vs. Gorgui Dieng matchup.  That will be important only during the part of the game that won’t determine the winner.

Conversely, for Louisville to win, the Michigan backcourt must turn the ball over when the Cardinals decide it’s time to win the game.  If they are able to go on a 12-2 run or better, Louisville wins.

This is a 40-minute game, but it will be decided during a five-minute period during the middle part of the second half.

For years and years and years, the prevailing media wisdom has been to mimic those who say that the NCAA Tournament is determined by the strength of teams guards, and this year won’t help those who will try to contradict that.

Louisville’s backcourt of Siva and Smith, and wings Luke Hancock and Wayne Blackshear, along with Burke and Tim Hardaway Jr. have been excellent.  McGary has also been outstanding, and maybe the best player in the tourney to this point, but without a special backcourt, it would seem advancing to win five straight is dependent  upon great guards.

The match up of coaches is interesting as well.  Louisville’s Rick Pitino has been phenomenal everywhere he’s gone, and tonight will try to become the first coach in tournament history to lead two school to titles.  It’s amazing that no one has to this point.  Pitino is one of the best coaches in basketball, and what I’ve enjoyed so much about him this season is that it seems he has evolved as many do as they get older to understand the most important thin in coaching is the relationship developed with the kids.

John Beilein is just a flat-out great coach.  He’s quiet and unassuming, which I also like.  The game is not about him.  He’s not in any performance mode on the sidelines.  He prepares, processes, and adjusts.  When Michigan needed an answer for the Syracuse 2-3 zone, he told them to get the ball in the middle.  They did, and the offense succeeded.  Go figure.

There is also the made for CBS storyline of the grotesque injury to Kevin Ware that serves to galvanize the media’s attention, as though the Cardinals have been better because they lost the services of a hell of a good player, which of course is ludicrous.

I hate that Ware suffered the injury, but my pity has turned to annoyance as CBS has turned his presence on the sideline into an idiotic and irrelevant subplot designed to pluck the heart strings of female fans.

There appears to be a chapter in the CBS Playbook that mandates the use of some kid’s misery to place the events it broadcasts in some mythical context that defies logic.

I hate that, although I would probably do exactly the same thing if I were in charge.

As is not always the case, the two best teams made it through the gauntlet of five games to make it to the championship.  The selection committee didn’t screw too much up, but the seeding of Michigan was one of them.  They have everything needed to win the game tonight.

The game will be won or lost during the stretch where Louisville tries to assert its frenetic dominance.  If Michigan overcomes it, they win their first championship since 1989.  If not, Louisville wins their third, joining the 1980 and 1986 teams of Denny Crum.

I believe Louisville will blitzkrieg Michigan from the 13-minute mark of the second half to the under eight TV timeout to build a lead that Michigan will not be able to overcome.  Louisville wins 68-62.