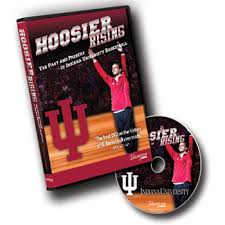 Tonight two teams other than Indiana University will play for the National Championship, but this afternoon was a perfect time to relive some of the moments and people who have made the Indiana Basketball program unique in its purity and success.

There was a time when March came with an air of certainty that good things were in store.  This DVD clears the cobwebs of the memory and reminds fans what makes Indiana special.

I remember the championship games from 1976, 1981, and 1987 like they were yesterday, and so do the people in the video who discusses the players.

The 1976 game was played exactly six days prior to me moving with my family from Chicago to southern Indiana, but we watched the Hoosiers throttle Michigan 86-68.  That was the last game I watched without being immersed in the culture of college basketball.  In Chicago, college basketball was so far down the list of favorite sports to watch on TV that you couldn’t see it.  In New Albany, college basketball was an easy #1, and the championship for May, Buckner, and Benson was a great primer.

In 1981, I was a freshman at Indiana, and when the Hoosiers broke the game open with a great second half against North Carolina, the campus exploded with joy and a swath of destruction from Showalter Fountain to the Monroe County Courthouse that would have made Civil War General William Sherman blush.  Anything that could be knocked over was, and the fish from the fountain were recovered quickly after being dismantled and deposited all over campus.

In 1987, I watched alone in an apartment in Harrisburg, Illinois, where I had taken a job after graduation at WSIL-TV as a news photographer.  Keith Smart’s jumper, and Syracuse’s lack of presence of mind to call a timeout set off a celebration in that dump that was as ridiculous as it was joyous.

Everyone has their own memories of those wonderful nights, as well as the disappointments of 1975, 1993 and 2002 are discussed at length as well.

The real fun is remembering how very special the program was from Bob Knight’s arrival until the mid-1990s.  Indiana Basketball meant something.  What it stood for was special.  The lunkheads that allow Knight’s hubris and lack of couth to define his 29 years in Bloomington won’t understand what it was like to be a fan of both the results and the culture of Indiana Basketball.

All that moral highground was destroyed during a two-year reign of terror authored by Kelvin Sampson and Rob Senderoff.  That important era is given a frank discussion, as is the rebuild by Tom Crean.

The DVD can be purchased at IU Bookstores and online at www.traditionofsports.com, and a big part of the presentation is the listing of the top ten teams in Hoosier history, as well as the top 25 players.  The difficulty is that very few of those evaluating the players ever saw guys like Don Schlundt, Walt Bellamy, or Jimmy Rayl play.

That aside, I have no quarrel with the rankings.  There have been so many wonderful players at Indiana, that it’s impossible to screw up completely.  It’s not like they threw Steve Bouchie in at #6 or anything like that.

Basketball is special in Indiana – special in a way that people who have never lived in Indiana can’t understand.  It’s like what gymnastics is to Romania, distance running is to Kenya, and marrying cousins is to Kentuckians.  Basketball defines Indiana to many, both inside and outside the state, and that history is covered at the top of the video.

After two trips to the Sweet 16, Indiana fans want another chapter of greatness so the DVD will need an update.  After 26 years since the last championship, and 11 since a Final Four, it’s long overdue.

For right now though, I’ll settle for kids going to IU because of criteria that don’t include cash paid to relatives, student-athletes going to class and getting their degrees, and playing a style of basketball that best represents the history of Indiana Basketball.

Until next year, this DVD will serve as a reminder of what once was, and what may be again.

As tonight, as we recall fondly the 1981 and 1987 championships, let’s remember that both immediately followed a Louisville NCAA title.