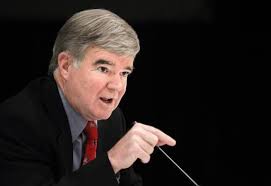 There is nothing better than a subversive idea that could cripple a hopelessly pompous and archaic operation like the NCAA.

Mike McCall posted a magnificent piece today on Outkick the Coverage that asks for college football and basketball fans to walk up to their favorite athlete, and hand them some cash.  Videotape the transaction while saying, “Hi, you’re Texas A&M quarterback and Heisman Trophy winner Johnny Manziel. Based solely on your skill as a football player, I am presenting you with a cash award of $10.”  Then, you forward the video to the NCAA.

The idea is to create such a cacophony of violations that the NCAA would be forced to throw up its hands and declare itself useless.  A rule with no one willing to follow it is not a rule.

This needs to happen thousands of times, and at every division one program.  The NCAA would be forced to reform its rules, and accept that treating student-athletes generating millions for each school’s athletic department as serfs defines unfairness.

Other ideas, like a strike by the players in the BCS Championship game or the NCAA Championship will never happen.  There is only so much that can be expected of 20-year-olds.  To collectively sacrifice the biggest night of their lives for an ideal which will never benefit them is too much to ask.  Isiah Thomas was pissed off in 1981 because coverage of the assassination attempt on President Reagan preempted his soap operas.  College athletes are not unanimous in seeing the big picture.

This is like the wonderful moment as third graders that the people in my class bought into my notion that if none of us obeyed Mrs. Zimmer’s heavy-handed directives, she would be rendered powerless.  What I didn’t count on were the drunken rants she launched at my parents, and the Ds on my report card despite my superior performance.

Finally at mid-year, our anarchic class was merged with Mrs. Randolph’s class, and instead of having all the goofballs separated into two rooms, we were one massive insane group of power mad nine-year-olds hell bent on hatching subversive plans to make ourselves laugh and the teachers miserable.

We saw ourselves as miniature passive resistors, and that is exactly the course opposition should take in trying to reduce the NCAA to nothing more than a building filled with baffled academics running in circles as they ponder what the hell went very wrong.

Not only will we achieve the correct result, we will make self-impressed pseudo-intellectuals miserable.  This could be the biggest win-win in the history of collegiate sports.

For a more detailed explanation of Fanarchy Day, click here