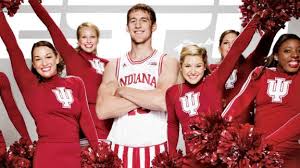 Cody Zeller surrounded by some excellent reasons to stay in school.

Yesterday’s announcement by Victor Oladipo was entirely without drama, but today’s scheduled press conference for Zeller will bring with it a little doubt about the outcome.

It’s not a certainty that Zeller will announce that he will forego his last two years of eligibility at Indiana to enter the NBA Draft, but a press conference would be an odd choice for a kid whose primary message would be that he does not consider himself ready for the next level.

Zeller is smart, and smart kids don’t put themselves in a position to diagnose the weaknesses in their own NBA resume’.

There are holes in Zeller’s game that were evident in the number of shots of his (six) that Syracuse defenders blocked in the Sweet 16 loss that was likely Zeller’s last game as a Hoosier.  If he can’t get the ball to the rim against college bigs, his success rate isn’t likely to be very good against the best in the world.

Holes can be more easily plugged during workouts unencumbered by a schedule of classes than with those interruptions, and it won’t take long to teach Cody tactics and build the muscle necessary to clear enough room for him to get his shot.

The same lifestyle reasons exist for Zeller as Oladipo to stick around in Bloomington – like when the hell are you going to have more contentment in your life than when your biggest worry is when the next rain will come so you can go splash students at bus stops with your 1992 Ford Taurus – but the same allure exists to jump.

Cody’s brother Tyler was not nearly as highly regarded while at North Carolina, but was faced with a decision himself after his junior year, and decided to stay.  Last night after playing the Pacers in Indiana, Zeller told the Cleveland Plain-Dealer’s Mary Schmitt-Boyer, “I always tell him it’s something you can’t get back. When it’s time you’ve got to go, but at the same time, you can’t get college back. It’s kind of a balancing act.  I’m really glad I went back. It was a great experience.”

Would Tyler be surprised if Cody came back to IU next season?  “Not at all, he’s on pace to graduate in three years. Indiana’s a great school, and he has a lot of support there.  It will be interesting to see what he does. It’s his decision and he needs to make it based on what he wants to do, not on what other people want.”

If Hoosier Nation is looking for a Lloyd Christmas level of hope for Zeller’s return, his brother has provided it with those quotes.

Lottery pick cash and the challenge to play among and against the best players on Earth are tough to pass on.  There is an impatience to the behavior of 20-year-olds, and there is nothing wrong with that.  The rule of thumb is that if a kid will get drafted in the first round, you take the guaranteed cash.  If not, you might be better off trying to improve your stock.

NBA scouts are a weird bunch, as the measure of a basketball player is mostly subjective.  Kids get hot, ride a wave, and go in the top ten.  If they stay in school, there is a risk that scouts will find more holes, and their stock will cool.  Same player, different perspective, and less cash.

And that’s why kids like Zeller get hot feet.  If he stays, and shows only slight improvement, the slide could land them in the second round, like Duke’s Josh McRoberts.  It’s no one’s dream to play in the NBDL, so it’s hard to blame Zeller for listening to the experts that have him being drafted in the middle of the lottery.

One of the least fair aspects of this life altering decision is that the NCAA requires players to withdraw from the draft on April 16th or earlier to retain their eligibility.  That’s before the draft camp in Chicago or any other meaningful assessment can be made by the player or his family.  And why?  Because coaches want more time to recruit a replacement.  Sure, college athletics are for the kids.

So armed with the information he, Tom Crean, and his parents have been able to gather, Cody will announce today whether he will return or not to the Hoosiers.  Three starters are already gone, and that can’t make the thought of staying any more attractive.  There is virtual certainty that Zeller will make Yogi Ferrell the lone returnee of the starting five.

The growth curve for the Hoosiers basketball program has been steadily upward since Crean arrived in Bloomington almost exactly five years ago.  Now, if Zeller leaves, Indiana’s future is becoming more uncertain.

The press conference announcing Zeller’s intention will be held at 4p ET today at Assembly Hall.