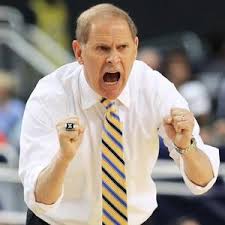 John Beilein wasn’t just a coach last night – he was an example for his student-athletes and peers.

It doesn’t happen everyday, but there are still coaches out there who take responsibility for a mistake in a big moment of a huge game.

Michigan coach John Beilein stood up and publicly took a bullet.  In doing so he hopefully set an example that other coaches and business leaders might follow.

During the final minute of last night’s loss, Michigan did not foul as quickly as they should have with five team fouls.  They needed two to move Louisville into the bonus so the Cardinals would shoot, and perhaps miss foul shots giving Michigan a chance to cut into the lead.

He was asked about it in the postgame press conference, and here’s what he had to say:

Everything I have ever heard about Beilein is that he is a classy guy who can flat out coach.  Throughout this tournament, he proved he is a very solid basketball coach, but during the press conference, he proved he is a great leader.

People spend a lot of time talking about the importance of admitting mistakes, but almost no one actually does it.  Some tiptoe close to it, but then can’t help themselves in bringing the hint of an alibi to the party that negates the initial good act and renders the admission moot.

Beilein’s behavior shows the character of a man who doesn’t simply teach the game, but provides an excellent example to those players and students that he is committed to educating.

He could have said that there was miscommunication, and the players didn’t completely understand his message.  I’ve heard lots of coaches go that route.  Beilein sacked up, and gave the University of Michigan something to be proud of after a tough loss.