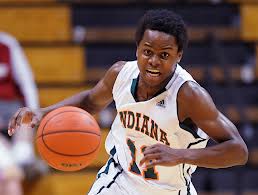 When Indiana cuts down the nets in Cowboys Stadium in a year, it will be because Yogi Ferrell is the leader who got the Hoosiers there.

I’m calling it right now.  Indiana will win.  Yesterday, I picked Louisville to win by six.  What happened?  Louisville won by six.  I’m on a roll, and this top ten is an effort to strike while the iron is hot.

9 – The Hoosiers have the #3 freshman class ready to report for duty, and while the players on their way out of Cook Hall were instrumental in bringing Indiana back into the national conversation, the new blood is dynamic as any class in my excellent memory.  Noah Vonleh, Troy Williams, and Stanford Robinson are coming to Bloomington ready to earn minutes and wins.  Luke Fischer, Collin Hartman, and Devin Davis are long and skilled.

8 – Yogi Ferrell gets the keys to the car this season as a sophomore.  On a team with a bunch of upperclassmen, Ferrell deferred to more established leaders.  While that was the right thing to do for the benefit of the team, it negated one of his greatest assets – leadership.  Not to continue the unfair comparison between Ferrell and hall of famer Isiah Thomas, but Bob Knight was smart enough to let Thomas run the offense halfway through the 1981 championship season.  We’ll see if Tom Crean has the same faith in Ferrell.

7 – The players on the 1975, and 1980 Indiana teams thought they had a great chance to win the NCAA Tournament, only to win it the next year.  The 1986 season was the “Season on the Brink.”  The 2012 season was supposed to see the coronation of Indiana’s latest banner winning squad.  Obviously, the 2013 team is destined to be something.

6 – College basketball is incredibly difficult to predict because it’s so difficult to project what freshmen will do, and what the vacuum created by departing future NBA stars will create.  The question in #6 isn’t “Why Indiana?”, but “Why not Indiana?”

5 – The returning players will take the leap forward into roles that starters kept them from filling in 2012-2013.  Will Sheehey can flat score the basketball, and is a clever rebounder and defender.  Jeremy Hollowell was stunted by an inability to mesh with the more seasoned players his freshman year.  Hanner Perea is incredibly athletic, and will develop the court awareness needed to contribute on both ends.  Peter Jurkin’s foot will heal, and he will begin fulfilling the JaJuan Johnson-esque promise scouts predicted.  Remy Abell will shoot it like he did early last season for the entire year.  That’s a lot of hoping, and in my hope for Abell’s 2014, shooting 80% from beyond the arc is not likely, but the first practice for next season is more than six months away and that is when hope blossoms.

4 – There is still no guarantee that Victor Oladipo and Cody Zeller will declare for the 2013 NBA Draft.  It’s a longshot that both will be back, but if they do, the starting five will be Ferrell, Oladipo, Sheehey, Vonleh, and Zeller.  That is a preseason #1 lineup.  If only Oladipo heads to the pros, the Hoosiers supplant him with Abell or Robinson.  If both leave, Indiana coaches, players, managers, and fans need to take shifts working with Perea like the cast of “Back to School” did with Thornton Mellon as he studied for finals.

3 – Success occurs at completely random intervals, and nothing is more random than Indiana not going to the Finals four after one, 13, 20, 3, 5, 6, 5, and 10 years.  When the Hoosiers make it in 2014, that will be a completely random 12 years after the last trip.  It doesn’t escape me that #10 on this list would debunk our random success theory, but as long as both yield the most positive result, they can coexist happily.

2 – The Big Ten is long overdue for hoisting the hardware after losing in five straight championship games, dating back to Indiana’s loss to Maryland in the 2002 Championship.

1 – Tom Crean is going to be a better coach.  He’s closing in on 50, and that is the age that leaders learn what behaviors cause the desired result.  Crean will relax more, enjoy more, and stop trying to prove how good a coach he is.  He’ll just be that great coach that is inside him.