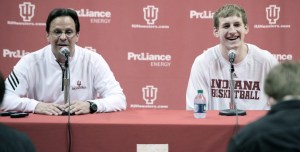 There are several people I know and respect who have told me that Indiana Basketball coach Tom Crean is an asshole.  They worked with and around him when Crean coached at Marquette.  They are good people who were treated poorly by Crean.  I’m not a fan of assholes, so I’m constantly on the lookout for behavior that reveals a person to be one.

There have been a few a-ha instances of weirdness.  The strange smirk after the run-in with Michigan assistant Jeff Meyer, the bizarre demand for an explanation about the criteria for selection as the conference’s player of the week from a Big Ten assistant media relations director, the cutting down of the nets at Assembly Hall after a loss, and rings for a trip to the 2012 Sweet 16 were all troubling.

So when watching the press conferences announcing that Victor Oladipo and Cody Zeller would forego the remainder of their collegiate eligibility to enter the NBA Draft, I looked hard for any sign that Crean would use the big moment that should belong to these young millionaires to be to communicate a graceless self-aggrandizing message.

Crean brought exactly the opposite.  He was generous with his praise for the character of both players, and without a hint of a “look what I built” vibe.

My opinion of Crean continues to evolve.  In my former profession of managing the programming departments for talk radio stations, the key to hiring great talent is being able to recognize a personality that is immediately accessible.  Raw, honest, and true makes for great radio, just as it does in a bar when you meet a stranger.

Because that hunger to ‘know‘ a person immediately goes unsatisfied by Crean’s words and behavior, I judged his personality negatively.  While watching the press conferences, I kept asking myself what fans should want from a coach.

Wins – The job of a coach is to teach the game well enough to allow players to win games.  Given the facilities and proximity to great high school players, there is no excuse for a good coach to not win.

Chance to win a championship – Let’s face it.  Banners matter.  Fans don’t need one every year, but getting to a Final Four every four or five years is important, or at least it will be until the football program starts contending for a Big Ten title.  What paradigm shift might occur when that happens on a regular basis is anyone’s guess as it is unprecedented.

Meaningful degree for players – Fans should demand that the student-athletes, whose only compensation for generating millions and millions for the university, is a degree that will serve as a gateway to success.  The patent immorality of the business model for big time college football and basketball requires a legitimate education, and the future it facilitates.

Recruit successfully without cheating – The dads, uncles, cousins, and bobos who try to cash in on the talents of an 18-year-old need not apply at Indiana University.  If the Hoosiers ever go rogue again, I will make it the mission of my life to bring pain to the lives of the cheaters.  That’s not a tremendously powerful threat, but it’s all I have.  The misery wrought by Kelvin Sampson must never be repeated.  College education isn’t confined to a classroom.  Examples are important, and the lesson that cheating is needed to succeed is an anathema to any legitimate institution of higher learning.

From any reasonable perspective, Crean has succeeded in addressing those four criteria.  His players appear sincere in their praise for him as a mentor, and that’s a bonus.

Fans don’t need to be buddies with a coach; they need to respect his work.  After five years of watching Crean closely, after watching his unending energy for the position, his work deserves a hell of a lot of credit.

Everything he does is done with purpose and the belief it will lead to a better result both on the court and in the maturity of the players who trust him.

The previous two press conferences were distinguished by solid performances by a comfortable leader.  It wasn’t shocking, but it was pleasing.