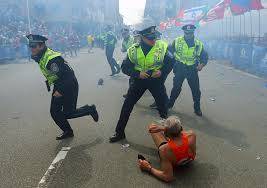 The video is terrible.  Runners fell to the ground immediately after the explosion.  Pictures of severed limbs and the three who died are all over the networks, websites, and newspapers.  The question is being asked in every home, “Are we safe?”  The answer is no.

There is good news in that the odds of being blown up pale in comparison to the chances of dying in other ways.

I know a person who refuses to do business in a bank because of the chance it might be robbed.  In 2009, 21 people died in bank robberies in the United States.  All 21 were robbers.

The point is not to minimize the tragedy in Boston, but to make sure our response is proportionate and reasonable.  For the three who died, were injured, and their families and friends, it doesn’t matter if the odds are almost incalculable that they would be harmed during the running of yesterday’s Boston Marathon.  It happened, and they deserve our compassion and love.

But let’s keep this horror show from altering the joy with which we live our lives.  To gather for any event with a thought of the danger that lurks is irrational and unwarranted.

Say a prayer, relax, and enjoy yourself.  Unless your primary fear is that you will die of heart disease, stroke, or cancer, it will likely go unanswered.

The media doesn’t go to any great lengths to show people dying of heart attacks and cancer because it happens all the time (more than one-million times each year in America).  The media likes two things – the unusual and video of it happening.  The job of media is to compel an emotional response, and there is nothing like video of explosions to shock us.

Showing us the very best and very worst of human nature is what the media focuses on every hour of every day, and planting bombs where innocents will certainly be injured or killed qualifies as the worst.  Wanton acts of violence are the tools of those who devalue life and liberty, and the perpetrators should be forever removed from our midst.

To rob a family of a loving eight-year-old who waited at the finish line to hug his dad as he finish is as heinous and miserable an act as I can possibly imagine.  I don’t believe we have ever executed a murderer in America by stoning him or her to death, but if a judge sees fit to authorize one here, I’ll pack some rocks and head to Boston.

But our reaction in our daily lives should be to give their act no power as we move on with our lives.  Every time zealots act to change our way of life, we should tell them to go to hell by continuing to love, trust, and laugh.

Cowering in fear fulfills the terrorists’ psychotic need to turn us into them.  Don’t indulge it.  Make them powerless by ignoring the act and attacking life.

One thought on “Boston Marathon Tragedy – Respond by Living with Love, Compassion, and Joy”