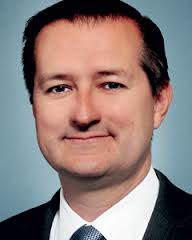 I’ve finally had it with this smarmy intellectual creep.  Cubs owner Tom Ricketts has finally gone too far – way too far – in campaigning for what is now the framework of an agreement  for expanding the profitability of Wrigley Field and the area near it.

There is language for additional night events – up to 61, between the regularly scheduled Cubs games, concerts, possible rescheduled games due to cancellations, and games picked up by ESPN that won’t count against the schedule.

Ricketts wants to put signage everywhere the eye can see in and around Wrigley, and wants to violate the agreement with rooftop owners.  He wants restrictions in place to prohibit advertising outside Wrigley and visible inside Wrigley.  There is also a prohibition of peddling, likely to stop the vendors catching people on their way in. In short – nobody gets to make money from the foot traffic near Wrigley but the Cubs.

All of that is just business as usual for business.  Maximizing the ability to profit is Ricketts right, even if they go over the “Mr. Potter” (from “It’s a Wonderful Life”) line in restricting the guys who sell discount peanuts across the street from the main entrance, and near the Addison el stop.  Ricketts paid $850 million like a boob for the Cubs.  Getting a chance to recoup it isn’t evil.

What is evil is what this grinning gnome said in discussing the framework of the agreement, “If this plan is approved, we will win the World Series for our fans and our city. We need this project in order to bring our fans a winner. The financial impact of this proposal will help us do that.

“It’s a significant amount of dollars that can be generated. … I’m not sure exactly which dollars come in which years, but it absolutely increases Theo’s [Epstein] ability to put dollars to work on the field — and substantially.”

What an idiotic promise.  To advance the notion that there is a guaranteed quid pro quo for allowing the Cubs to turn Wrigley Field into a whorehouse of billboards, video screens, and increased square footage designed to do nothing more than allow Ricketts to stuff his pockets at the expense of the rubes who continue to hold out hope that one day the Cubs will win.

Ricketts, if he weren’t such a disingenuous twit, would have said, “Hey, what do you think, I bought this mess to blow my family’s fortune.  I want cash, and the more I can wring out of it, the better.  You know why?  Because this is America, and that’s what we do here.  If you could make a billion dollars on the backs of the morons who continue to march into Wrigley Field to watch the product I eviscerate as I shake their hands and thank them for coming, wouldn’t you!”

Yes, fans watch Ricketts and his gang of poor stewards trot out a terrible team season after season, and then thank him.  Now because Ricketts wants to turn one of the most beautiful places on earth into  a garden of images clamoring for the attention of the three million fans who show up each year to watch the Cubs suck, he guarantees a World Series championship.

It’s a P.T. Barnum-esque statement that should be a large enough insult to keep even the most ravenous fan from paying to watch misery in blue pinstripes.  Of course, it won’t because people are idiots.  Ricketts is a bad enough guy to leverage that idiocy into mogul level wealth.

The only acceptable response is for Cubs fans to deny themselves the torture of watching Edwin Jackson earn his $13 million a year for throwing enough wild pitches to make a scorecard illegible, and Alfonso Soriano avoid RBIs like his religion prohibits it.  If Cubs fans were smart enough to grasp the level at which they are being fleeced, the only person watching this daily tragedy of sub-mediocrity would be head grifter Crane Kenney.

Profiting from the misery of others is a chart topper of immorality, and with every utterance of optimism, Ricketts secures his spot as one of our cultures most miserable cretins.  By guaranteeing a World Series title – if the City of Chicago approves his heavy handed effort to turn Wrigley into Vegas East – he has crossed a line that belies a huge sack, and a tiny heart.

Cubs fans have suffered through three crazy ownerships over the last century.  From the time the Wrigley Family became majority owners in 1921 and ran the team with quaint incompetance through the Tribune Company’s occasional reasonable stewardship to the money grubbing Ricketts, the loyalty of a great fan base has been as ill-served as any in the history of sports.

It’s time they rise up and end this mockery.  Hurt this leech where it hurts – his wallet.