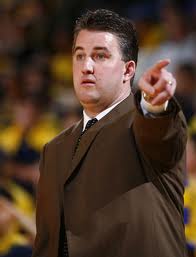 A few years ago, my boss walked into a department head meeting and said, “I like all of you, but I love my family.” If Matt Painter didn’t say that in words this week as three Boilermakers have departed for parts unknown, the message is clear.

What happened last season will not be repeated.

Sandi Marcius, Jacob Lawson, and now Anthony Johnson are transferring.  Dru Anthrop and D.J. Byrd are going to graduate next month, so what’s left is a very young and talented group to find a way to bounce back, and if they can’t the exit door will continue to get plenty of use.

Painter is not going to sit still for 16-18 because that is not the result he is paid to provide, and right now, minus the results of a very talented 2007 recruiting class, the Painter Era has been less than steller.

For the four years E’Twaun Moore, Robbie Hummel, and JaJuan Johnson played together, Purdue was an outstanding 107-33.  In the four years without the Big Three, the Boilers have been 69-62.  That represents a 9 1/2 win per season difference.

Two years ago, Painter had the opportunity to jump to Missouri, and he passed on the gig at the 11th hour.  If Ronnie Johnson, Terone Johnson, A.J. Hammons, Raphael Davis, and New Albany’s Donnie Hale will welcome guard Bryson Scott, and wings Basil Smotherman and Kendall Stephens.  Scott is ranked #75 by Rivals, and Stephens and Smotherman come in at #61 and #112.

The class ranks #27 nationally and fourth in the Big Ten, also according to Rivals.  That’s a good class for Purdue, but can it be enough for the Boilers to break into the upper echelon of the conference?

Indiana has lost a ton of offense with the graduation of Jordan Hulls and Christian Watford, and Victor Oladipo and Cody Zeller heading to the NBA, but they welcome the number three class in the country.  Michigan loses Trey Burke and a bunch of inconsequential seniors (no offense!), but brings in Zak Irvin (#34), Derrick Walton (#47), and Mark Donnal (#107).  Michigan State has everybody coming back but Derrick Nix, and adds Gavin Schilling (#125).  Ohio State loses Deshaun Thomas to the pros and Evan Ravenel to graduation, but bring back everyone else including the great Aaron Craft.  They also add to top 100 freshman in Marc Loving and Kameron Williams.

Closing the gap require not just your own improvement, but a more profound improvement than your competition.

There is no doubt Purdue will improve if there is a switch that flips for Hammons.  He is capable of being a dominant big man, but must embrace a work ethic that will find him lead the charge back on defense, not trailing the play.  When he wants to be great as he did against Indiana last season, he is special.  He needs to wake up with that desire, and that starts now, not in November.

This will be a fascinating year for the Boilers program and for Painter’s career.  He’s one of the best coaches in the country, but cannot have another 16-18 season.

The three kids who have abandoned ship, or been shoved off the plank, were not going to lead the Boilers to a Big Ten title, but through their absence might provide the motivation for those who remain.  Painter is not playing games.  It’s win or walk in West Lafayette.