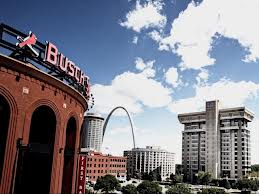 The building where I lived is on the right. It is not among the things about St. Louis I will not miss.

I got my haircut yesterday – always a landmark of futility.  Why I bother is anyone’s guess.  The guy cutting away is talking about the pride he feels in living in Indianapolis, and I start talking about the differences between Indy, St. Louis, Louisville, and Chicago – the four cities where I have spent considerable time.  There were a lot of positives about every city, but I did have an odd number of negatives about a place where I spent only two years.

Some of my grievances about St. Louis are easily addressed.  Others are likely to remain forever, and two will be addressed through the laws of nature.  It bears mention that overall, I really enjoyed my time there.  The positives outweigh the negatives for sure – and the majority of the people with whom I worked top that list.

Here are my least favorite things about St. Louis:

10 – Mardi Gras  Tried it twice, and while looking at a strange women’s boobs is a crapshoot, the amount of liquor that is consumed by the celebrators is troubling.  By 4 p.m., there are hundreds of people passed out throughout Soulard.   I never understood the whole ‘Let’s drink until we are unconscious’ philosophy of fun, and it’s the rule of the day of the Mardi Gras Parade.  St. Louis is a beer drinking town, but on this day that fun reputation rolls totally off the rails into liver damaging excess.  It bears mention that women with nice breasts are usually reluctant to share them.  Most along the parade route are leathery sacks of goop for which gravity has done no favors.

9 – Neglected Downtown  I was told by someone in the Cardinals front office that Ballpark Village is the first privately funded retail construction in the downtown area since 1986.  It’s a pretty area, but very few people live there, and if not for sporting events, no one other than misguided tourists would ever visit.  I lived there for two years, and not a day went by that I didn’t curse the civic leaders that have allowed it to crumble into a poor imitation of another river town – Memphis.

8 – St. Louis Drivers  Every city has its share of bad drivers, but the highways and streets in St. Louis are filled with the lowest level of drivers I’ve ever had the misery to get stuck behind.  In most cities, the left lane of a highway is called the “fast lane” or “passing lane”.  In St. Louis, all lane are equal.  The left lane appears to be the place where texters who are distracted by driving choose to not be bothered by cars passing them.  In a lot of cities, drivers yell at people for going way too fast.  I can’t count the number of times I’ve seen a 1978 Delta 88 slalom through traffic on the Dan Ryan in Chicago at 85 mph.  In St. Louis, I can’t count the number of times I’ve seen similar cars drift toward or away from downtown at 40 mph in the left lane.  Totally unpredictable, but never accommodating, the drivers in St. Louis are collectively the worst in America.

7 – Lumiere Casino – Just under one mile north of where we lived, there is a casino we would occasionally visit.  Our net gain/loss was probably very close to even because of a strong start and finish, so I shouldn’t complain, but to watch people who don’t have a lot of money squander what they can’t afford to lose in machines that were built with the specific purpose of taking their money did nothing to renew my faith in the intellectual capabilities of humanity.

6 – Mike Shannon  Unlike the #3 thing I dislike about St. Louis, I don’t know Shannon personally.  He may be a wonderful man whose farts smell like roses, or he may be a real pill.  I’ve never met him, but the way he calls Cardinals games on KMOX drove me nuts.  I could never tell what the hell was going on.  As a young fan, I listened to broadcaster who related pertinent game information, so that’s what I crave.  St. Louisans have been conditioned over the years to enjoy Shannon’s style.  No way I could convert.

5 – The Cardinals  Until I moved to St. Louis, I never understood why the Cubs never won.  Then I watched closely how the Cardinals go about their business, and I realized that the Cubs didn’t lose because of curses of billy goats or black cats.  They lose because they are competing with a franchise that simply does everything right.  The Cardinals not only play fundamentally sound baseball at a consistently high level, the front office is filled with decent people who wake up every day dedicated to making a trip to Busch Stadium rewarding for every fan who buys a ticket.  As long as the Cubs compete with the Cardinals, the seasons of success will be infrequent outliers.  I’ll miss watching a team that does it right, but won’t miss them because they make watching the Cubs an unpleasant chore.  The Cards made me get it, and I wish I didn’t.

4 – Stoplights  In most cities, the longest duration for red lights is 30-34 seconds.  In St. Louis, the lights downtown can last up to 90 seconds, and the traffic downtown is nonexistent.  Moving one block at a time every 90 seconds is miserable, and the city does nothing to affect change.  The mayor gets re-elected by a landslide while people can’t move in an abandoned downtown because of stoplights that are unnecessary because of a lack of traffic.  I’m a big fan of evaluating cities based upon the execution of the detail work.  St. Louis gets an F in controlling traffic flow.  By God, they’ll ticket your asses for rolling through a right turn on red, but as for making things convenient, forget it.

3 – [Selection Redacted]  Somehow and someway, this guy continues to work in the media.  That St. Louisans listen to him and read what he writes is an affront to media consumption.  I debated whether to include him in this list because there is something classless about picking on those who can’t sufficiently defend themselves, but I decided to do it because it’s the truth – a concept with which this person is not closely associated.  A news report on Fox2 in St. Louis did a pretty good job of revealing the guy as what he is, and I could have let his own video do the talking, but what fun is that?

2 – Imo’s Pizza  I encourage everyone visiting St. Louis for the first time to get one Imo’s Pizza.  Take a big bite.  You will likely be as confused as I was.  There is something very different with the consistency.  It takes a couple of bites to realize that the cheese is very odd.  It’s called Provel, and it’s a mixture of cheddar, swiss, and provolone.  When melted, it’s more liquid than solid.

1 – Racism  When I moved to St. Louis, I asked a co-worker how the Metrolink works.  I was looking for a easy way to get downtown and heard about this light rail conveyance that runs from the airport through downtown and into Illinois.  The co-worker warned me away from the Metrolink by saying, “Oh don’t take that.  It goes through areas where it gets dark early.”  I was repulsed, and while most St. Louisans don’t reflect that attitude, there is an unpleasant under-current of racism that exists.

3 thoughts on “Ten Things I Do Not Miss About St. Louis”