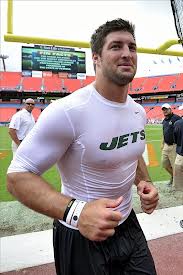 Only one back-up quarterback in NFL history could claim a breaking news alert on ESPN for his release, and it happened today with Tim Tebow.  The New York Jets cut ties with Tebow this morning, and the coverage is just short of the death of a former president.

The Jets drafted Geno Smith, signed David Garrard in March, and still have Mark Sanchez under contract so there is no room at the inn for Tebow, America’s favorite irrelevant quarterback.

Sports is usually a meritocracy.  The people who are talked about are the people who produce on the field.  It’s not Hollywood where subjectivity allows for fame to be conferred through curious behavior.  Cash is earned in sports.  Paris Hilton can’t exist in sports, and neither can Tebow.

Tebow may be a wonderful human being and a magical leader, but he cannot play quarterback at the NFL level.  ESPN’s Merril Hoge tried to tell us that, and it damn near ruined his career as an analyst.  That Hoge told the truth was meaningless because he insulted a revered Christian.

Now, because Tebow is incapable of taking no for an answer, he will continue to work hard to earn an invitation to play elsewhere, and that team will regret the decision to sign him immediately.  Tebow is a media darling who has inspired millions through his clean living and devotion to Christ.

That fosters a wide chasm between popularity and ability, which allows a grotesque environment for everyone associated with an NFL team that signs him.  Football games in the NFL aren’t won by the most reverent team – they are won by the fastest, most precise, and meanest men.  Criminals and Christians are on equal footing on the gridiron.

It would have made for a great story to have Tebow suddenly figure out how to throw a football as truly as he lives his life, but that’s not what happened.

Football experts like Bill Polian are claiming that Tebow will not get another job in the NFL unless he “publicly renounces” his position as quarterback.  Tebow renouncing his standing as a quarterback/leader on a football team is as likely as his renunciation of his belief in Christ.

A quarterback is not just what he did for a living, it represents who he is as a human being.  And with the right arm of Drew Brees or Peyton Manning, he would have been an all-time great.

Failing as an NFL quarterback will not define Tebow’s legacy.  He was one of the all-time greats for Urban Meyer at the University of Florida, and in Gainesville his legendary leadership will be celebrated forever.  But the NFL isn’t the SEC, and Tebow isn’t a Manning.

NFL fans who jumped on Hoge for accurately assessing Tebow owe him an apology.  He told the truth better than Tebow throws a football.