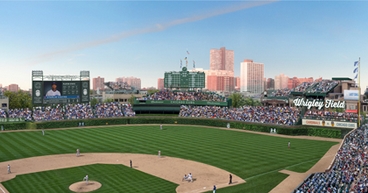 I wish Cubs owner Tom Ricketts played poker and I could get a seat at his table.  Every time he plays a hand, he bluffs, and I would own the Cubs the next day.

Today, at a breakfast of business owners in Chicago, he threatened to move.  Cubs fans and the City of Chicago should respond as a unified chorus, “Go ahead, dumbass.  Move.”

The issue isn’t the need for the renovation of the Friendly Confines, it’s a matter of being insulted by clumsy tactics.

The Cubs as of May 1, 2013 have two assets that are meaningful for people shelling out the cash to buy tickets – a fun pre and post game area that can extend a ballgame into a daylong social event, and the nostalgia that Wrigley Field represents.

If the Cubs and Ricketts were forced to rely upon the guys with red Cs on their caps to draw fans, there would be plenty of parking around Wrigley Field on game days.

When I go to Wrigley, I make sure and walk up the same tunnel that my Dad helped me up when I went to my first Cubs game on April 16, 1968 – a 9-8 loss against the Reds that featured an Ernie Banks home run.  I am not nearly as captivated by a Nate Schierholtz at bat as I am remembering my Dad catching a foul ball off the bat of Jesus Alou during a 9-2 win on July 29, 1970.

If Ricketts wants to play hard ball, do it in Schaumburg, where he will be able to shake the hands of every fan, personally thank them for coming, and hear a captivating story about their favorite Wrigley Field memory – all before the end of the fifth inning.  If Edwin Jackson is pitching for the Cubs, – before the end of the fourth.

The playbook Ricketts is using can only work if he’s willing to do what he threatens or has the capability to deliver what he promises.

This morning, he told the City Club of Chicago where he was the guest speaker, “I’m not sure how anyone is going to stop the signs in the outfield, but if it comes to the point that we don’t have the ability to do what we need to do in our outfield then we’re going to have to consider moving.  It’s a simple as that.”

His last trick was to guarantee a World Championship if he’s allowed to whore out the ballpark with video signage in left field, right field, and all about the town.  Now, he threatens to move.  His tactics are more vapid than Starlin Castro’s grasp of baseball fundamentals..

If this was Ricketts plan when he bought the Cubs in 2009, he strategized poorly.  Wrigley Field is a dilapidated wreck of an iconic baseball palace.  It’s inadequate in many ways.  Beautiful for fans, but not a pleasant home for the Cubs or their opponents.  It’s a relic that is closing in on its 100th birthday, and that’s exactly what Ricketts bought.  He’s very proud of talking about how he and his brother spent afternoons in the bleachers when he lived across the street, so certainly he was aware that Wrigley is not comparable in any way to the newer ballparks.

Because Ricketts has been told his entire life how smart he is, he believes the fanbase and Chicago Board of Alderman can be bullied by laughably hollow threats and promises – simultaneously.

If Ricketts wants to make the point that Wrigley needs a serious amount of work to bring it up to the standards of the 29 other Major League ballparks, I’m all in.  The water table sits a few feet under the clubhouse, so burrowing lower is out.  The Cubs need to build out on the limited footprint bound by Clark, Addison, Waveland and Sheffield.  I get it.

But to talk about the superstructure as the primary need is disingenuous.  What Ricketts and chief henchman Crane Kenney want is a laundry list of monetizable assets including giant signs, zoning variances, vendor restrictions, and other concessions that will allow the Ricketts to bulk up their profit margin and offset the largest debt load in baseball.

Chicago has always worked in the same way – the right people get paid and construction starts.  Threats fall on deaf ears without being accompanied by a satchel full of cash, and while it’s a romantic notion I embrace to think fans might rebel against this cabal of buffoons, the real insult is to the intelligence and bank accounts of politicians whose palms need to be greased for anything in Cook County to get done.

For Ricketts to think he can galvanize enough popular support to offset the greed among those with real power that has been the fuel for Chicago’s growth since before Big Bill Thompson was mayor is both arrogant and stupid – not a combination that allows for success.

I’m sure Ricketts was pleased with his performance this morning, but he has only engrained more indelibly his image as a naive laggard among the greedy swine.

Wrigley Field should be renovated, and I don’t care if the rooftop people are financially disemboweled by massive video boards that obstruct their patrons’ view of the action, but these are not the tactics that will get the job done, and if anyone thinks Ricketts is going to overpay for talent with the proceeds that come from the signage, well, that’s a whole different column.