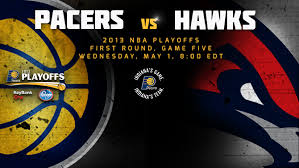 Tonight’s Game Five matchup between the Indiana Pacers and Atlanta Hawks is the biggest game for the Pacers since Reggie Miller’s retirement ushered in a era of fan malaise the franchise has been trying to climb from since.

With a win in this series, the Pacers would show progress.  With a loss, the bubbling enthusiasm for this group would calm.  A win, and the resulting series with the Knicks (up 3-1 on the Celtics) would spur season ticket sales, and give the Pacers some momentum in driving media coverage in central Indiana.

Games One and Two in Indy exposed the Hawks as an inexuberant group of free agents to be looking ahead to vacations.  Games Three and Four were a vastly different story with the Hawks appearing ready to compete for big contracts, if not an NBA Championship.  They are flawed, but facing indifferent defense, the Hawks have shown the ability to score at will.

With the series now a best of three with tonight’s Game Five in Indy, every possession counts, and the Pacers should know exactly what they need to do to be victorious.  If they need reminders, here are ten:

10 – Stay in front of Jeff Teague.  Watch Teague get by his man, and then keep him right behind him.  Teague waits for the help to come, and dishes, or explodes to the rim if help doesn’t rotate.  He’s not a great outside shooter.  Stay in front of him.

9 – Paul George adjusts to different defenders.  It seems Hawks coach Larry Drew has discovered what we all knew – that Kyle Korver can’t defend Paul George.  So George had to deal with a variety of defense challengers, including Josh Smith.  Every possession Smith is paired with George, he needs to create contact and draw fouls .

8 – No silly fouls.  If Josh Smith is aggressive and tries to get to the rim, he is going to draw enough fouls.  Using fouls judiciously when necessary works as long as the silly fouls don’t cause David West or Roy Hibbert to sit for extended minutes.  Every minute lost by the starters makes the job tougher for the Pacers.

7 – Skinny up the rotation.  Frank Vogel showed that he’s willing to let starters play extended minutes in the second half of Game Four, and the Pacers almost clawed their way back into the game.  The +/- numbers for the bench were brutal in Atlanta (not a single bench player had a positive number), and trusting D.J. Augustine, Gerald Green, Tyler Hansbrough, and Ian Mahinmi to hold the game differential level during their shifts is not justifiable.

6 – Hack-a-Hawk – I’m borrowing this from 1070 the Fan’s Joe Staysniak, but many of the Hawks are terrible from the foul line.  Josh Smith and Al Horford both stand a foot farther from the foul line than is necessary to shoot foul shots.  That means they are so desperate to make free throws, they will resort to idiocy to try to clear their own mental block.

4 – Get to the line 30 times – In the first half of Game Four, the Pacers got to the line only six times as the Hawks built a 57-40 lead.  In the second half, the Pacers made 15-19 free throws, and they outscored the Hawks 51-45.  Playing more energetic defense in the third quarter had a lot to do with that point differential, but aggressive defense leads to aggressive offense – and vice-versa.

3 – Limit second chance points – The Hawks grabbed 11 offensive rebounds in Game Four that led to 13 points, including a Korver three-poiner with 2:32 to play that ran the Hawks lead from a manageable six points to a much tough nine.  Had the Pacers gathered it, they are down six with the ball.  In addition to the points, the Pacers committed five fouls immediately following the offensive rebounds.

2 – Remove humanity from equation – There was a time that Michael Jordan was a decent human being who struggled to beat the Detroit Pistons in the playoffs.  Then, he became a heartless assassin who couldn’t be beaten.  He decided that doing whatever it takes to win was worth it.  Paul George needs to flip that switch, and the rest of the Pacers need to follow.  George isn’t Jordan, but he needs to bring more grit to the game.

1 – Stay with Kyle Korver.  There should not be a moment tonight that a Pacer is not in Korver’s pocket.  Korver is one of the most effective scorers from outside the arc in the NBA, and helping off of him is never an acceptable tactic.  If he is allowed shoot uncontested shots, the Pacers will lose.