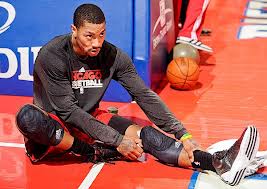 The guy pictured above is the only person who knows whether he should play in the Bulls vs. Heat series.

For months, the knuckleheads in Chicago sportsradio and boobs who troll message boards have been eager to advice and criticize Bulls guard Derrick Rose for not playing after being cleared by his doctors.  Derrick can thank his brother Reggie for all this noise.

The Bulls will open their Eastern Conference Semifinals tonight against LeBron James and the Miami Heat, and fans in Chicago will either damn Rose for not sacking up while the rest of his team is hurting – or continue to patiently pat him on ass as Rose gets comfortable with his surgically reconstructed ACL.

It’s crazy for anyone to presume they know exactly how Rose feels.  Every knee is a little different, and for orthopedics who haven’t treated him to draw any conclusion is irresponsible.  For laymen like you and me, it’s ignorant and stupid.

Rose does not know at what level or even whether he would be able to compete, and has no way to find out.  The Bulls could scrimmage, but who against?  The team is hobbling, ill, or both.  There is no way to approximate the on court action against James, Dwyane Wade, and their posse of champions.

As players rehab, the timetable is different for all.  Minnesota Vikings running back Adrian Peterson took 10 months, and it looks like former South Carolina running back Marcus Lattimore seems to be on a similar trek.  Other guys have taken longer, and some never feel comfortable with their new knee.

When star players go down, they aren’t simply members of a team that fans adore.  They are the heads of their own corporation, and often times the only source of income for a large group of family and friends.  Rose is a 24 year-old CEO with a potential for 10-12 years of prime earnings – prime meaning a minimum average of $19M/year from the Bulls, plus a deal with Nike that is worth more than that.

There is selfish, and then there is selfish.  If he doesn’t want to aggravate the knee and put a quarter of a billion dollars in play, he lets down teammates and fans.  If he shreds his knee against the Heat in a futile attempt to lead his team, he lets down family, friends, and employees.

Even if Rose was 100% healthy, the chances of the Bulls beating the Heat would be so minimal, there would be no point?  If you want to test a knee, you don’t do it against the best team in the world when the stakes are highest.

Would most of us find a way to get on the floor to try to give our team a better if insignificant chance?  We like to think we would, but we don’t know all of the criteria Rose is using in making this decision or how that knee really feels.

One thing we have learned over the years is that Rose’s brother should shut the hell up.  He’s always been a loudmouth who sullied Rose’s rep by association.  Reggie wasn’t born on third base.  He was carried there by his brother’s talent.

The quotes attributed to Reggie on February 22 opened the pandora’s box of speculation as to whether his brother would play if the chance of winning a championship was poor.  Reggie poured gas on the fire 10 weeks ago, and his brother’s feet have been held to it since.