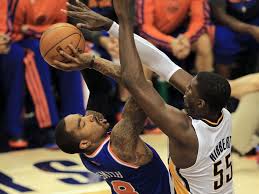 The Great Wall of Hibbert makes a long night longer for the Knicks J.R. Smith.

The pundits thought the Knicks would play like caged animals.  Their backs to the wall, the Knicks surely would claw like rabid wolverines to even up the series tonight.  The Pacers expected them to be frantic, focused, and frenzied.

The Knicks slept through Game Four, putting up a disinterested, dispirited effort that made them easy pickings for the young guns from Indianapolis.

“No rebounds, no rings,” was the quote from coach Pat Riley for an earlier version of the Knicks with Patrick Ewing, Charles Oakley, and other pros who knew how to fight and win battles under the boards.  It’s no less true now, and if Mike Woodson is saying it, his players aren’t good listeners.

The Pacers outrebounded the Knicks by 18.  The total of 54 rebounds were spread evenly among several Pacers, with David West (10), Paul George (14), and Roy Hibbert (11) all in double figures.

Both the Pacers and Knicks scored exactly the same number of field goals (31) and three-pointers (8), but the Pacers were 23-30 from the line while the Knicks were 12-14.  The Knicks committed 29 fouls to the Pacers 18.  That’s the difference between a team that is willing to attack the basket, and one that settles for jump shots.

Knicks fans must wonder why Chris Copeland plays such short minutes.  He was +12 during his 12 minutes.

The rest of the Knicks were not plus anything.  Carmelo Anthony, J.R. Smith, Kenyon Martin, Iman Shumpert, and Jason Kidd combined to shoot 16-56 for the game.

Turnovers might have been a problem for the Pacers, especially in the first half, but the Knicks were only able to generate 12 points from the Pacers 16 miscues.  In the only game the Knicks have won in the series, the Pacers turned it over 21 times leading to 32 Knicks points.

If the Knicks can’t regroup and play with what passes for conscious effort, the series will almost surely end with Thursday night’s Game Five at Madison Square Garden (game time 8p ET).

Whether it’s because of bruise, the flu, the croup, or general malaise due to low blood sugar, the Knicks have thrown up three miserable efforts, and the Pacers have the look of a team that is ready for a bite at the Miami Heat.

Some credit needs to go to the Pacers defense for making every Knicks possession a root canal, but the Knicks are avoiding almost all the dirty work that wins playoff series.