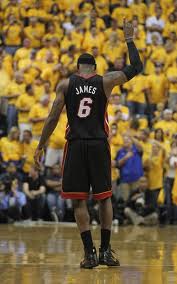 LeBron James will have to put the Heat on his back to repeat as champions.

There will not be a single analyst with any knowledge of basketball who will pick the Indiana Pacers to beat the Miami Heat in the Eastern Conference Finals, and they will likely be right.

Overcoming the best player in basketball is going to be a tough assignment.  LeBron James is not just a physical freak at 6’8″, 250 lbs., he has a knack for waiting until what Reggie Miller and others call “winning time” to assert himself and suck all hope from a team like New Orleans hookers on Fat Tuesday.

That doesn’t mean the Pacers are totally without a righteous chance in this series.  The series starts even, and the first team to four wins punches their ticket to the 2013 NBA Finals.

There are those who will claim that the NBA won’t allow the Heat to lose – that the referees will be assigned in a way that will ensure a Heat victory.  While I have seen some things over the years that gave me reason to be suspicious, I can’t imagine that the NBA would engage in fixing games.  The risk of alienating the entire fan base by conspiring to fix a result is too great – even for a self-important czar like commissioner David Stern.

This series is not over before it begins, and here are ten reasons the starless Pacers could shock the world and make miserable, ESPN – the network that celebrates stars above all else:

10 – Pacers took the Heat to a sixth game in 2012  Before the Heat found their offense in last year’s 4-2 series win over the Pacers, the blue and gold held them to 75 points in two consecutive games to take a 2-1 lead.  The last three games were a different story, but the Pacers need to remember what they did to cause such anemic offensive performances.

9 – Hibbert’s numbers better than Bosh  At least statistically in this postseason, Pacers center Roy Hibbert is posting better numbers than that of his counterpart.  Bosh is averaging 13.2 ppg and 8.3 rebounds.  Hibbert is at 14.0 and 9.6.

8 – Young = Stupid  Minus David West, the Pacers have no one on the roster over the age of 27, and while they are in ascension, they might be silly enough to believe they can win.  All great upsets start with belief.

7 – LeBron had a tough series vs. the Bulls  After a great start to the postseason against the Milwaukee Bucks, shooting 62.7%, he shot only 43.8% against the Bulls.  That could mean that he’s due, but I am choosing to believe both that he’s wearing down, and that the Bulls figured something out.  They played him physically, and that caused both some problems for LeBron and an average of 10.4 trips to the line per game.

6 – Pacers were 2-1 against Heat in 2013  The Pacers present some strange match-ups for most teams.  Hibbert is one of the few traditional centers in basketball, Paul George’s height, length, and athleticism, and Lance Stephenson’s reckless abandon make the Pacers difficult to prepare for, and that might allow the Pacers to steal one in South Beach.

5 – Beyond Big Three – Heat an expansion team  The Miami Heat pay LeBron James, Dwyane Wade, and Chris Bosh a combined $52,272,000.  The remaining players on the roster earn $28 million, led by Mike Miller’s $5,800,000.  And those inexpensive players are aging quickly.Only one player in the Heat’s rotation is younger than the second oldest Pacer – Norris Cole at 24.  Nine of the Heat at 30 or older.  Thirteen of the 14 healthy Pacers are 27 or younger.  The longer a season goes, the more the bumps and bruises accumulate.

4 – Dwyane Wade’s knee is killing him  Wade has averaged only 13 ppg in 33 minutes during the postseason.  Last season as the Heat won the championship, Wade averaged 22.8 ppg in 39 minutes, and 26.2 ppg against the Pacers, including a 41 point masterpiece in the series clinching Game Six.  He was 17-25 shooting in that game, so you could say that when healthy he is who Carmelo Anthony thinks he is.

3 – Heat can’t board  While the Pacers are the best rebounding team in the NBA, the Heat are the worst.  In a series where the Pacers are going to need to take advantage of all areas where they enjoy an advantage, this would appear to be an important one.  The difference from first to last is only seven rebounds, but getting seven more than the other guys is better than getting seven less.

2 – Pacers are undefeated at home in postseason  Granted, the first six have been against teams other than the defending champs, but with repetition comes trust, and with trust comes belief.

1 – The Pacers are tough to shoot threes against  The Heat like shooting threes, ranking second in 3pt% at 39.6% and third in overall 3pt makes with 717.  The Pacers allow opponents to make only 32.7% of their 3pt attempts, which leads the NBA.  They are also first in allowing total threes with only 440.

When the series gets underway on Wednesday night, the numbers will be meaningless.  It will be up to the players to assert their will and skill against one another.  If I had to given reasons why the Heat will trounce the Pacers, I could come up with a bunch of them.  That wasn’t the assignment here.

Do I believe the Pacers will win the series?  No.  Do I believe they can win, you bet.  The Pacers had a tougher hill to climb in 1998 against Michael Jordan and the Chicago Bulls in the Eastern Conference Finals, and dropped the first two in Chicago to really stack the deck against themselves.  They held serve at Market Square Arena to force a Game Seven, which they led by four with five minutes left.

That would be a hell of a result for a team with some similar characteristics.