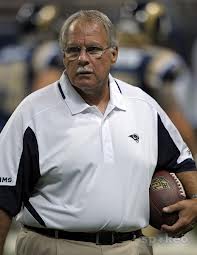 There is no doubt that the St. Louis Rams have taken a quantum leap forward from where they were less than 18 months ago, but the 49ers and Seahawks haven’t been sitting on their hands either.

Improving compared to yourself doesn’t win you games.  You have to get better compared to your competition, and because of that the Rams may have a tough time in their division, according to former NFL head coach and one of the best defensive coordinators in NFL history.

The Rams still have question marks, like whether a combination of 2012 draftees Isaiah Pead and Daryl Richardson, along with Stacy can replace Jackson’s steady productivity?

2013 is going to be a fascinating test for the team that boasted the best record against their division foe – 4-1-1.  The top to bottom rebuild of the franchise is clicking along very nicely, but are the Rams improving quickly enough to catch the 49ers and Seahawks?

Here’s Coach Venturi on how the NFC West lines up: