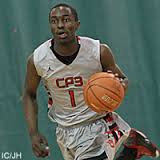 All you can do is all you can do, and by all accounts that’s what Indiana Men’s Basketball Coach Tom Crean did in his pursuit to snare five-star recruit Theo Pinson.

The 6’6″, 180 lbs. wing committed to North Carolina today.  He’s similar to Michael Jordan in more than appearance, although a better passer.  He’s hard not to like, this kid from Greensboro, North Carolina.

Outrecruiting a home court advantage is difficult, as UNC coach Roy Williams found out when Crean and Indiana won the battle for NBA bound Cody Zeller.

I’m glad word of the announcement came out of the blue and was followed by the commitment itself very quickly.  Fans didn’t have a chance to get all worked up like they did for Andrew Wiggins, who was treated poorly after announcing his choice to attend Kansas.

It was easy over the past few days of digging into who Pinson is to figure out why the nation’s blue chip programs were after him.  He’s an excellent passer, and solid shooter, a generous teammate, and long enough to be a very good defender.  I didn’t read or hear an unkind word about him, and every morning he tweets “Good Morning, World!”  Hard not to like that kid.

Indiana will move on in its recruiting and should wish Pinson well.  Indiana fans should too.  They should leave the bush league nonsense to Kentucky.