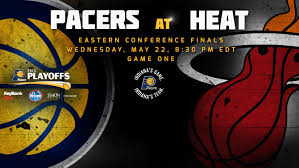 The folks at ESPN treated the Indiana Pacers like carbuncles through the series against the New York Knicks.  Every Knicks loss was due to the Knicks making mistakes, and every win was earn because of the Knicks superior play.  The Pacers might have been on the floor, but the effect they had on the game was negligible.

As soon as the Pacers vanquished the Knicks in six, attention turned to the Eastern Conference Finals between Indiana and Miami, and the coronation for LeBron was on – again.  Pundits called for the Heat to sweep or allow the Pacers to win one before sending them home.

All of a sudden during the last 24 hours, there was a noticeable pivot toward Indiana.  The ESPN panel of experts including Chris Broussard, J.A. Adande, Israel Gutierrez, Marc Stein, and 11 others all pick the Heat.  Four picked the Heat in five, eight picked them in six, and two expect the series to go seven.

The more interesting nugget is that eight of 14 have the Heat winning Game Six in Indianapolis, as that is the only way Miami can end it in six.  Why the love for the Pacers to win two games, but only two believe the Pacers can force a Game Seven with a win at Banker’s Life Fieldhouse.

Let’s be honest, Pacers fans.  If Dwyane Wade was healthy, the Pacers would have zero chance to win four of seven against a team that has won 45 of their last 48.  It’s still a tough road with Wade at 80%.

The series, regardless of the outcome, is going to be interesting because the teams go about their difference in polar opposite ways.  The Heat are a team that belongs to the star among stars.  They have three big time players, and the King Bee is LeBron.  He’s the best player of his generation, and everyone on the Heat knows it.  They orbit him and he enjoys being their sun.

The Pacers are a star less group who rely upon their collective energy to overcome teams who behave selfishly – and there’s a lot of that going around in the NBA.  They defend as a team, and run their offense without anyone trying to take over a game.

If you believe basketball is a game of stars, as NBA Commissioner tries to assert with every decision, there is a team for you to root for.  The Heat have two stars and a very good third wheel.  They can be spectacular, and LeBron is capable of scoring every Heat point for a quarter or more.

If you want basketball to be a sport where the whole is greater than the sum of the parts – that there is no I in team, and appreciative of the beauty of the extra pass, the Pacers have earned your adulation.  Each of the five starters for the Pacers led at least one game in scoring (Paul George did it twice), and all but point guard George Hill led at least one game in rebounds.  They don’t care who scores, and that makes them the anti-Heat.

The Pacers have two Achilles heels – a decided lack of the kind of depth that can compete with a championship team like the Heat, and a propensity to turn the ball over.  Against the Knicks, minus their Game Two loss, the Pacers managed to keep their turnovers from killing them by getting back on defense and keeping the Knicks from turning them into points.  Against the Heat, the task is tougher.  If the Pacers get into foul trouble (specifically Roy Hibbert), or allow more than 20 points off turnovers, they will have a tough time digging out from under that hole.

The national media might get an education about team basketball over the next two weeks, or they might be proven right in believing that a name above the team logo is what’s necessary to win a title.

I think the Pacers take this thing to a Game Seven, and it will be a one possession game with five minutes left.  From there, LeBron tries to take over.