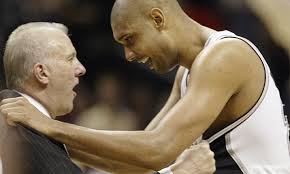 Rarely has a coach and player existed in as much successful harmony as Gregg Popovich and Tim Duncan.

Let’s face it, without a rooting interest the NBA Finals are terrible television.  The last 90-seconds of a close game can take almost a half-hour, and there is so much physical contact the referees can justifiably call fouls on every possession.

The Miami heat host the San Antonio Spurs tonight in Game One of a best-of-seven series with the Larry O’Brien Trophy on the line.  Game time is 9p, so only the unemployed can watch to the end without being groggy tomorrow.

The people in the Eastern Time Zone are used to this indifference from the TV networks, but still need a damn good reason to corrupt a good night sleep to watch the finale of a sporting event.

I’m hear to help.  Hear are the five reasons I’m going to watch despite having zero interest in who reigns supreme as the 2013 NBA Champion:

5 – Spurs play Indiana basketball.  If any team in the NBA embodies what Hoosiers like to feel defines the style of play developed here, it’s the Spurs.

They move the ball quickly and with precision – averaging an incredible 23.6 assists per game.

Coach Gregg Popovich is a native of East Chicago, Indiana, and has brought an Indiana style of play to the NBA that does not reward the selfishness that is pervasive among most other outfits.

The Spurs seem not to care at all who scores, while the Heat players clearly do value scoring opportunities being distributed their way.

4 – Fun to see Chris Bosh fail.  Bosh has always appeared to be the third wheel of the Big Three.  He’s like the guy the cool kids invite along out of pity.  Dwyane Wade and LeBron James are the real deal, even if Wade is showing serious wear and tear.  Bosh who yells and gesticulates wildly during the rare moments of success has become the poster child for overrated huge contract guys in the NBA.

Even in the seventh game against the Pacers when the Heat triumphed and Wade rebounded, Bosh was 3-13 shooting, and scored a measly nine points.

Americans celebrate the fall of celebrities with greater enthusiasm than they do the successes, so watching Bosh in this finals should be a thrill.

If the Heat lose this series, it could very well mark the last time Bosh wears a Heat uniform.

3 – Tim Duncan is one of the best winners to ever play basketball, and because he draws so little attention to himself while playing in San Antonio, few have watched him play enough to understand the beauty of his game.

Duncan is the grim reaper in a tank top who smiles about as often as he loses.

In Duncan’s 15 seasons with the Spurs, San Antonio has gone 4-0 in trips to the NBA Finals, have never won less than 53 games (minus the strike shortened 1999 season when the Spurs won 37 of 50), and have never missed the playoffs – all for the same coach – Gregg Popovich.  During the Duncan/Popovich Era, the Spurs record is 905-423 for a winning percentage of 68.1.

2 – LeBron James is a singular talent, and while he possesses none of the charisma of many of the NBA greats who preceded him, watching him do things on the court at a level that have rarely been attempted.

He is at his physical peak, and it is very likely that by the time James wraps up his career, he will be known as one of the five best players to ever lace up a pair of Chucks.

This is a great opportunity to watch today’s version of Wilt and Michael do what he does best.

1 – Gregg Popovich in-game interview.  At the end of the first and third quarters, the NBA mandates that head coaches make themselves available to answer two questions from the network’s sideline reporter.  Popovich hates this, and his answers reflect that distaste.

His responses are hilarious.  Popovich reveals nothing, and glares at the reporter or stares at the ground while offering monosyllabic responses that corrupt totally the intent of the mandate.

Instead of saying nothing with many words, as counterpart Eric Spoelstra does, Popovich  says nothing with one word.

Anger is compelling, and that’s why Popovich’s interviews are both the best and worst in sports.