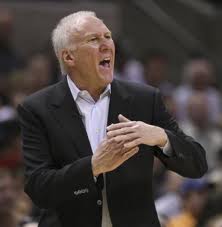 My son wanted Popovich to do this with :50 left – I did not.

There aren’t a lot of arguments in this house.  I was trained in arguing by some of the best at the art during holiday dinners when I was a child, and verbal duels takes me back to the darkness of the Nixon vs. Roosevelt donnybrooks between Dad and my Mom’s mom.  Those were the Ali vs. Fraziers of political brawls.

Last night, my son said that Spurs coach Gregg Popovich should have called timeout during the possession prior to the hook shot Tim Duncan missed down two with :48 seconds left.  I disagreed.

I never played basketball beyond the eighth grade, and Ryan has played thousands of games, including four years at Loyola of Chicago, but I still felt that a timeout would have given the Heat a chance to get centered defensively, and the result would have been a lower quality shot than a five foot hook by the only hall of gamer on the Spurs roster.

Ryan believed that the Spurs were exhausted, and needed the time to regroup.

I said that timeouts always favor the lesser prepared team, and that was the Heat.

Ryan doesn’t like arguing, and so after several tense minutes we agreed to disagree.

Sportstalk radio is all about sharing perspectives, and sometimes those thoughts lead to a dispute – hopefully a friendly dispute – because there is no definitive correct answer to many disagreements.

Bob Knight believed in playing man-to-man defense.  Jim Boeheim goes 2-3 zone exclusively.  Knight would almost always avoid taking timeouts late in the game, believing that his team knew at a higher level what they were doing than their opponent.  Coaches today would call timeouts prior to every offensive possession if they could.

In baseball, I would watch stunned as Jim Leyland would sacrifice bunt in the second inning of a scoreless game when he managed the Pittsburgh Pirates.  Earl Weaver waited for three-rum homers and great starting pitching to carry his Baltimore Orioles.  Both are among the top 20 all-time managers.

In football, Tony Dungy was a great defensive coach who favored the mostly passive Tampa 2 alignment.  Buddy Ryan was the architect of the most dominating defense in the history of the NFL, and the Chicago Bears played the smash mouth 46.  Both were among the best ever.

Who’s right and who’s wrong is a great source of debate, and there should never be a winner.

That’s what makes sportstalk a wonderful format for radio.  There is always something to talk about for people who examine the games.

As long as everyone walks in with the understanding that sports is not math and theorems are not used to decide whether Chris Bosh can or should be dealt this offseason.  Like politics, arguments are mostly subjective, and math can be used to bring clarity or clouds.

By the way, I’m quite certain that I was right that a timeout should not have been taken.

The last word is still something of value in this house.

One thought on “NBA Finals – Non-Timeout by Popovich with :50 Left Leads to Family Argument”