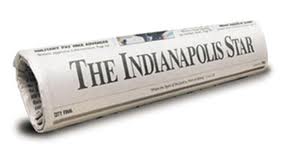 The rumors about a significant recalibration of assets at the Indianapolis Star’s sports department have come to pass with Mike Wells sliding over to the Indianapolis Colts beat, Mike Chappell continuing to cover the Colts, Terry Hutchens moved from the IU beat, David Woods moved from the Butler beat, and now Michael Pointer being named the interim Pacers reporter.

Rumors about the Star investing in a beat reporter for Purdue and Notre Dame were the two pieces of the puzzle that sadly did not and will not come to pass – at least not in the short term.  To expand coverage is not the way print media is headed, so there was significant doubt that the Star would move in that direction.

Moves to evolve coverage forward (whether they actually do that will be left for consumers to determine) should be ongoing, and while that evolution usually happens right over the top of longtime employees, media is in a constant state of change that requires constant maintenance.  It’s a shame for the people in the business of creating content, but it’s the reality of the media business today.

The speed with which consumption adjusts to new technologies is mind boggling, and when management stands still for even six months, those who are constantly trolling for new data, perspective, or first person accounts find alternate portals.

It would be great if the Star had the resources to devote to a dedicated Purdue beat reporter, but resources need to be allocated where the greatest interest lies.

The Indianapolis Star is likely never going to spend more money on content than they do today.  They need to be smart, ruthless, and creative if they are going to continue to publish a traditional daily newspaper.

These changes were a step in that direction.  It’s sad, but it’s also reality in media today.

To show the difference in how media is consumed and news is reported, I heard about Pointer’s new position through this Facebook post from Michael, “I can report that I will be taking over as the Indianapolis Star’s Pacers beat writer beginning Monday. I’m following in the huge shoes of Mike Wells, who leaves behind an incredibly high standard as he moves over to cover the Colts. For now, it’s an interim appointment. But Frank Vogel was an interim when he was named the head coach and that’s worked out OK. We’ll see what happens.”

We find the news where it is, not by waiting for the morning paper.