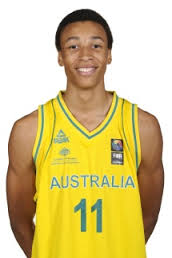 Winning a national championship is not worth turning Indiana Basketball into a de facto AAU team where players are gathered to exploit their basketball talents, while waiting for earliest possible payday.

But it’s not hard to see why Indiana coach Tom Crean would be going hard after Dante Exum, a 6’6″ point guard from Australia.  He’s long, quick, and two-handed around the bucket.

Exum spoke to draft express.com, and singled out Indiana as the school that is going after him the hardest.

Interestingly, Exum says that, depending upon the school he chooses and when he decides to commit, he could join a roster in December or for next year.

Indiana is full right now – using their full allotment of 13 scholarships – but have only used one of the two scholarships currently available for 2014-2015 with the expiration of eligibility of Will Sheehey and Evan Gordon.

Exum is eligible for the 2014 NBA Draft because he was born in 1995, and is from a foreign country.  He is projected in mock drafts as high as #3, but says that his focus is on playing in college.

There appears to be no way at all that Exum will remain at Indiana through the completion of his degree – or as close as former Hoosier Cody Zeller is – before jumping to the NBA like the kids recruited by so many programs that clearly value winning basketball games over providing student-athletes with an experience where they are allowed to mature, learn, and finally, put in a position to graduate.

As good as Dante Exum is, I hope that Indiana continues to build its program with student-athletes who aren’t just committed to improving as a basketball player.

Exum might be the exception to the rule as he appears focused on attending school rather than declare for the first NBA draft for which he is eligible, so if he wants to wait for his first NBA paycheck, this decision is easy.

Winning at the expense of the charter of a university is not what Indiana was, and it shouldn’t be what Indiana is.

Watch the video to hear a smart kid who is incredibly talented talk about his future.  If you were Crean, could you resist the temptation of the short-term greatness his signing could represent?