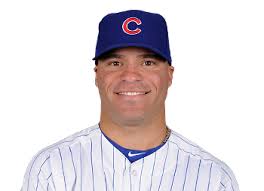 Scott Hairston should be smiling after picking up two positions and 8 1/2 games in the standings by sliding to the Nationals.

Maybe I have seen this kind of idiocy for too long to see the trade of platoon outfielder Scott Hairston as nothing but the continuation run of directionless talent acquisition and dispersal by a franchise that needs to be focused on the distant future.

Hairston signed a two-year, $5-million deal shortly before spring training began, and now the Cubs are dealing him to the Washington Nationals for a pitcher in A-ball.  Reports are that the Nats will take on the remainder of Hairston’s deal this year, but that the Cubs will need to kick in $500K toward Hairston’s $2.5 million next year.

So, the signing of Hairston amounts to the Cubs spending approximately $1.8 million to acquire right-hander Ivan Pineyro (21, recently called up to high-A Potomac) – the kind of Single-A pitcher who gets shuffled for a 33-year-old part-time outfielder mired in the kind of slump that turns players into media members.

This isn’t about Hairston’s .172 batting average and .232 OBP.  It’s about what possibly could have motivated the expense associated with a player who is a small piece of a winning culture, or a big piece of a loser.

The Cubs were going to lose this season regardless of whether Hairston or Iowa Cub and Chicago native Brian Bogusevic played part time .  That Bogusevic is left handed while Hairston bats right handed is meaningless.  If an outfielder swung a bat through his legs like a croquet mallet, the Cubs would still not win or lose much more than they were destined to prior to the season.

It’s an insult to Cubs owner Tom Ricketts’ money that the Cubs spent $1.8 million when the upside was negligible.  I won’t mention the $5.5-million pitcher Scott Baker is being paid this year to play catch and throw simulated games because my head will explode.  I can’t imagine Ricketts is thrilled when he signs the checks.  If healthy, the Cubs still don’t contend with Baker, so what the hell kind of strange conversations occur in the conference rooms at 1060 West Addison?

The only reasonable explanation is that the Cubs front office spends a significant portion of the offseason trying to build hope among fans when they are well aware none exists.

Those 16 year-olds like pitchers Jefferson Mejia (Dominican) and Erling Moreno (Colombia), Dominican shortstop Gleyber Torres, outfielder Eloy Jimenez are going to take a minimum of five years to develop, meaning that a significant portion of the fans overspending for tickets today will be dead by the time the Cubs are ready to compete.

My issue is obviously not with the way the Cubs are stockpiling top ranked prospects for the distant future, but the idiocy that drives meaningless spending like that which brought Hairston to Chicago.

The Cubs are woking the international system to compete with the Cardinals in 2019 as the best organization in baseball, and spending to try to win 72 games instead of 69 in 2013 is wasteful and representative of the duplicity that has been the hallmark of the Ricketts ownership and the Epstein regime.

The selling off of their roster is good business.  Starting pitcher Matt Garza should be dealt to fortify the farm system, and if they can get more international player pool money in the bargain, that’s wonderful, but don’t spend cash on free agents in the offseason to dupe fans (saps) into believing that winning today is possible or that buying tickets is logical outside the fun and nostalgia of visiting Wrigley Field.

Cubs fans understand that 105 years of misery will not be reversed with quick fixes, so instead of signing an expensive every guy like Hairston, bring up some cheap mediocrity from Iowa, and use the savings to reduce ticket prices so we can relive childhood afternoons of watching Ernie, Billy, Ron, Kingman, Ryno, Greg, the Hawk, and Gracie without quite so much financial pain.