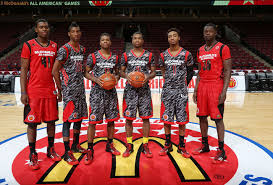 Here are the six 2013 Kentucky recruits that basketball fans will be talking about for decades.

The anti-Kentucky faction that enjoyed watching John Calipari’s Wildcats take a first round NIT beatdown at Robert Morris last March might need to savor that moment for awhile.  All five starters and two bench players are projected in the first round of next year’s draft by ESPN expert Chad Ford.

Here are the seven:

From there, a significant gap opens to the 72nd ranked Marcus Lee – another freshman, who despite being the ninth ranked power forward and 25th best player in the class, might not play much.

PF Kyle Wiltjer has announced his intention to transfer – kind of, but may choose to return.  If he enjoys playing for a really good team rather than having excellent seats for watching one of the most talented teams (on paper) in the last 30+ years, he will pack a bag and never look back.

Nerlens Noel’s injury derailed Kentucky last year, but this year’s group appears to have depth that can withstand a rash of injuries unseen since hobbling was all the rage in the penal systems of the Old West.

Twenty former Kentucky players opened the 2012-2013 season on NBA rosters.  That number is likely to bump by seven for 2014-2015, if Ford is correct in his assessment.  Over the past 15 years, Kentucky has sent 23 players to the NBA.

LSU and Florida have sent eight and 15 players to the league respectively in those same 15 years.  None of the rest of the SEC teams have sent more than seven.  Kentucky will get that done in one year, according to Ford.

It’s curious that six members of ESPN’s top 25 would all choose to pledge Wildcats simultaneously with only five starting spots available on the floor.

This level of success is unprecedented in collegiate basketball recruiting.  Never have so many players with enormous potential chosen to attend one school simultaneously.  John Calipari must be one charismatic fellow to attract that kind of gifted bounty.

I understand that Kentucky has developed a reputation for sending kids to the NBA, but if Kentucky is the launching pad, why is Andrew Wiggins ranked as the #1 player in the 2014 mock draft?

In the history of basketball, this level of talent has never been accumulated simultaneously, so Kentucky fans need to enjoy this one season that so many will be paying very close attention to.

It’s possible that people will be talking about this class for a very long time.