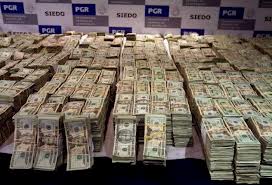 Matthew Stafford will be able to sort thousand dollar bills like I used to sort baseball cards because of his massively rewarding extension.

Signing a thoroughly mediocre quarterback who won my team four games last season to a three-year contract extension worth a guaranteed $41.5 million would cause a psychotic break from which I would never recover, and if it didn’t, my wife would cause enough blunt force trauma to my noggin that I would hope for psychosis.

We are currently looking for a TV that I told my wife might cost as much as $1,300.  She gave me the look of immediate and profound negative judgment reserved only for my most inspired acts of stupidity.

Lions owner William Clay Ford has never known what financial concern is, but still there must be part of his brain that seized while signing quarterback Matthew Stafford’s extension, and if his brain is defected toward quarterbacks in the way mine is about TVs, there must be someone in his life willing to tell him no – although it is unlikely that his wife, the former Martha Parke Firestone (the granddaughter of the tire and rubber magnate), provides any checks and balances for spending.

I get the need for a franchise quarterback, but other than volume (Stafford led the NFL in attempts and completions last season) I’m not sure in what way Stafford distinguished himself to the tune of $41.5 million guaranteed.  After a similarly busy 2011, when Stafford was borderline elite with 41 touchdowns and a QB rating of 97.2 in leading the Lions to their first playoff berth since 1999, Stafford had a difficult 2012 with 20 TDs, 17 picks, and a QBR of 79.8.

Someone needs to rattle the cages of sports franchise owners to remind them that real money is being spent.  Granted, CEOs of failing banks have been handed bigger bonus checks than what Stafford will earn through the duration of this contract, but a guy who led the offense of the 24th ranked team in the NFL cannot be worth more than one million per month for the 36 months of this deal (and he could earn up to a total of $53 million).

Media in Chicago blathered two nights ago about how smart it would be for the Cubs to sign pitcher Matt Garza to an extension for $15 million per year for three years.  Garza is 62-62 in his career, and recently recovered from an elbow injury that kept him from pitching for nine months.  That’s from the media covering a team who painted itself into a box by signing the thoroughly mediocre mistake hitter Alfonso Soriano to an eight-year, $133 million deal beginning in 2007 that won’t expire until the end of the 2014 season.  Slow learners, those guys.

How about the money the Steinbrenner family continues to pay Alex Rodriguez – $28 million for playing zero games this season, and a minimum of $20 million for the next four years?  That’s an all-time cuckoo investment.  The Yankees only hope for recouping a chunk of that booty is a looooong suspension of Rodriguez for PED usage, or a calamitous injury that would force Rodriguez to retire – engaging an insurance policy payout for the remainder of his deal.

The Lions set the bar yesterday that has to make the agents for quarterbacks like Tony Romo and Sam Bradford salivate.  Excellence being rewarded is an American tradition, but the relentless overspending to gather and maintain average performers is madness.

Like I keep telling Julie, it’s not the amount we drop on the TV that counts, it’s the enjoyment it generates.  Maybe I should have been an NFL franchise owner.