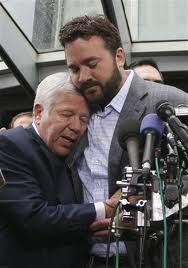 This picture proves that if you are a good guy, people will eventually see it.

We had already spoken to a few people about the opening for Colts player/analyst prior to the 2000 season when center Jeff Saturday walked into program director Jon Quick’s office, but as soon as Jeff opened his mouth, it was clear he was our guy.

The others were either too slick, too awkward, or too dull.  Jeff was interesting when he spoke, but more importantly, he was interested when others spoke.  Listening well is much more important than speaking well when evaluating potential talent.

ESPN knows what it’s doing, and saw the same thing we did 13 years ago.  Saturday above all else is an absolutely authentic guy – if he has ever behaved as someone he’s not, I would be stunned.  His comfort in his own skin translates into confident performance, and that’s the name of the game in radio or television.

Confident people listen.  Insecure people prattle on and on whether they have something to say or not.

The moment that brought Jeff’s decency to America’s attention was when he hugged New England Patriots owner Robert Kraft during the sometimes contentious negotiations during the NFL lockout two years ago.  Kraft’s wife had passed away five days earlier, and Saturday comforted him as they both spoke to the media after crafting the new labor agreement.

It was one genuine moment among the thousands in Saturday’s life, but this one was in front of every sports fan in America, and it cemented Saturday’s status as one of football’s all-time good guys.

It didn’t hurt Saturday’s resume’ that he spent his entire career snapping the ball to two of the NFL’s two premier quarterbacks – Peyton Manning and Aaron Rodgers, but what will give him staying power in Bristol is his ability to be exactly who he is.

Saturday is a great guy, and that will come through on both TV and radio.

The Emmis cluster of stations has been a launching pad for a number of national media members.  Dan Dakich is still at 1070 the Fan, and one of ESPN’s lead analysts for college basketball.  Trev Alberts worked first at Emmis during his rookie season with the Colts.  Charles Arbuckle was a sportstalk co-host in the early 1994-1995 on WIBC.  Clark Kellogg’s first media work was as current WIBC morning man Steve Simpson’s sports guy on WKLR.

Working in the media isn’t for everyone, but for those professional athletes who have the energy, inclination, and authenticity to get in the media, and the work ethic to stay there, cash awaits.

Nobody is better than ESPN at finding the right people, and they sure seem to look toward Indianapolis to stock its shelves.

Good for Jeff, and good for ESPN.