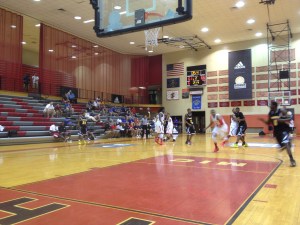 Kevin Looney flies down the wing about to convert an alley oop.

There is something wonderful about summer basketball tournaments.  From one game to the next, you have no inkling what might happen.

Teams that are assembled from neighborhoods can go to war against the nation’s best, and you never know.  Some are well coached and others are led by a goofball who spends the entire game talking on his cell phone.  Some teams care deeply about competing, and others just show up because that’s what they are told to do.

No expectations are necessary to enjoy watching these games, and despite never seeing most of the teams and kids from around the country who are in Indianapolis for the Adidas Invitational, it doesn’t take long to figure out which kids can play, care about each other, and will make excellent college players,and which have their heads screwed on backwards and stuck in the wrong place.

This morning’s marquee matchup was between the Milwaukee Running Rebels and Florida Elite.  Milwaukee is a crazy team that runs no offense, minus the occassional ball screen and whose players can’t wait to shoot and pose.  Florida is reasonably well coached and as unselfish as any summer team can be expected to be.

Milwaukee is led by Kevon Looney – a 6’9” power forward, who is a top 10 ranked kid, and the target of Duke, Florida, UCLA, Michigan State, and others.  He has all the measurables, but he’s never in a defensive stance, trails the play, and seems indifferent to the result.  I guess coaches believe that can be changed once on campus.

The point guard for Milwaukee is driving me crazy.  Damontrae Jefferson is a little fella at 5’8” who dominates the ball, shoots without success (in this game and last night’s), takes ridiculous defense risks, chirps nonstop, and bickers with teammates during timeouts.  He has offers from Cleveland State and New Mexico.

Florida has the 25th ranked kid in the 2014 class – Florida bound 6’5” wing Brandone Francis,  He’s fast, hustles, and has a smooth shot.  Dante Buford and Prince Ali are also fun to watch, as they play the kind of basketball I enjoy watching.

As is so often the case in these tournaments where kids stay in hotels, play at 8:00 a.m. and 10:00 at night, the results can be impossible to predict.  Milwaukee led the majority of the second half through a strange combination of defensive chaos and sporadic shooting.

This is a showcase as much as a tournament.  Coach K, Steve Alford, Bruce Weber, and another 50 coaches watched this contest – most because they still believe they have a shot at Looney.

I couldn’t help but wonder what they thought when the chirping chucker from Milwaukee made enough plays down the stretch to beat the more poised and selfless group from Florida 69-61.

Basketball is a funny game, and it’s never funnier than at summer tournaments like the Adidas Invitational, which continues through the 14th at North Central High School, and several other sites on the northside of Indianapolis.

It’s enlightening and entertaining, and every once in awhile a kid like Jefferson defies the expectation his behavior builds to change your mind.  Despite his apparent inability to do anything the way I would like to see it done, he walked out of the gym a winner this morning.