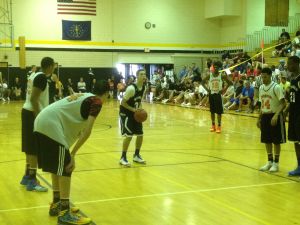 Bryant McIntosh gets ready to knock down a free throw late in the EG All-Stars 73-65 win over Dream Vision.

In a game like so many through the years, a team from Indiana took on another group with higher ranked players from another area and beat them by hitting open shots, and frustrating them defensively.

The EG All-Stars 73-65 win over Dream Vision was impressive given the rout Dream Vision put on a highly touted New York RENNS team this morning in the round of 32 of the Adidas Invitational.  That’s part of the fun of these tournaments, which will continue through the finals at North Central High School tomorrow.  Teams can’t play to their potential every game, and sometimes a matchup provides an opportunity to beat a more heralded group.

Indiana teams almost always do two things exceptionally well – shoot and execute fundamentals correctly.  They set good screens, work the ball unselfishly to exploit the right matchup, and block out like the rebound of every missed shot by an opponent means the difference in the game – and collectively they do.

Dream Vision was the team I enjoyed watching most to this point in the tourney, but they looked a step slower and less focused than they did in their previous five games.  Top five recruit Stephen Zimmerman appeared to have worn down just a bit, and the shots that fell earlier in the event for others didn’t find the net.

The opposite was true for the All-Stars.  Bryant McIntosh from Greensburg knocked in 26 points in a diverse offensive performance that validated his decision to walk away from his commitment to Indiana State – a decision that will keep ISU coach Greg Lansing up nights if McIntosh decides to go elsewhere.

He wasn’t alone in carrying the offensive load, as another Greensburg player, Sean Sellers, chipped in 11, and Sam Logwood added 10.  If defending 3A state champion Greensburg High School loses a game in 2013-2014, it won’t be because of their talent.  Not only do they have McIntosh and Sellers, in the 2015 class they have 6’8″ Ryan Welage, who is playing for Pat Mullin’s EG Central Stars.

Dream Vision took what appeared to be control of the game in the first half with a 35-27 lead, but McIntosh scored the last three baskets of the half to cut the lead to 35-33.  They had another run in the second half to build the lead to ten with 4:30 to play, and then it was take care of the ball, and don’t allow second chance points, which is on page one of the Indiana Way to Play Basketball Handbook.

Jamal Aytes of Dream Vision was a beast throughout, scoring 27 points, and cementing his status as a kid capable of helping a big time program right now.  He’s a 2013 kid with offers to San Diego, San Diego State, and UC Irvine, according to ESPN.  If I ran a program short a power forward, I would call Aytes today.  Unfortunately for a lot of schools, I don’t run their program, but Aytes can flat play a man’s game of basketball.

It’s as hard for a team like Dream Vision to prepare for an Indiana group like the All-Stars as it is for the All-Stars to prepare for the height of Zimmerman.  A fundamentally sound team that looks eminently beatable in warm-ups, but can stroke it and keep their bodies between the spot where opponents are and where they want to go is going to have to grind to manage a win in a one-game shoot out.

And it’s not that the All-Stars aren’t talented, they are, but that was not the reason they won today.  They won by playing winning basketball, rather than just playing basketball.

I wish I could see the Dream Vision team play a little deeper, but thrilled for McIntosh and his group.

Next up for the All-Stars tonight at 8:30p in the NCHS auxiliary gym will be top ten 2014 recruit Kevon Looney and the Milwaukee Rebels, but the key to beating Milwaukee won’t have much to do with Looney.  This game will be won or lost based upon the play of diminutive point guard Demontrae Jefferson, who is a tenacious player on both ends.  If he can be controlled or put into positions where he forces up bad shots, the All-Stars will win.  If not, tough game.